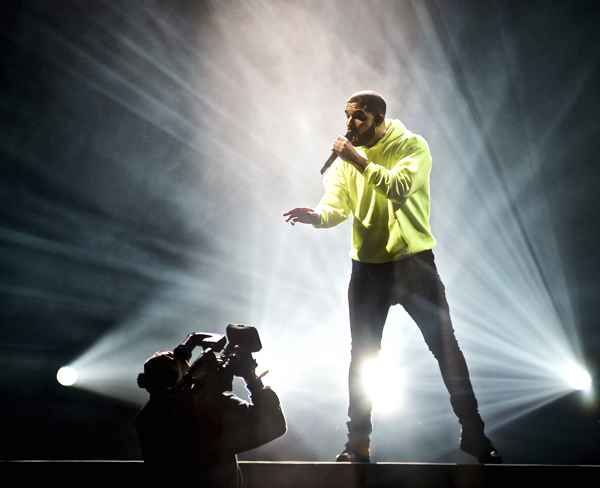 NEW YORK - Drake did not have a band, but the feverish audience at Governors Ball played along like they were onstage with the multi-platinum rapper Friday night.

Drake headlined the first night of the three-day festival on Randall’s Island in New York City, working the stage from left to right as he ran through his catalog of hits, from “Started From the Bottom’’ to “The Motto’’ to “Know Yourself,’’ the anthemic song from his latest album “If You’re Reading This It’s Too Late.’’ During the track, a fan jumped onstage and danced at the edge of it, but was quickly pulled away by security.

Drake was just energetic and excited during his 75-minute performance, which featured his music playing in the background instead of a live band. He jumped around in super slim black pants and a neon hoodie almost as bright as the fireworks that burst near the end of his set.

Drake said multiple times he loved the crowd so much he may be ready to bring his Canadian-based music festival, OVO Fest, to the Big Apple.

“You want me to bring the OVO Fest to New York?’’ the Canadian rapper asked. “I may have to bring Kanye out ... I might have to bring Beyonce out ... Me, Lil Wayne and Nicki Minaj.’’

He owned the crowd, dotted with signs that ranged from Drake’s recent album cover to an elementary school photo of the 28-year-old performer. Some women stood on top of their friends’ necks to get a better view of Drake in the packed crowd; guys did, too, standing on top of their friends and singing along excitedly to “Hold On, We’re Going Home.’’

The three-day Governors Ball will include performances by deadmau5, Bjork, “Weird Al’’ Yankovic, Lana Del Rey and A-Trak, who will DJ a special set at the Samsung Lounge after the Black Keys close the festival Sunday.

Friday’s show also included Charli XCX, St. Vincent, Chromeo and Florence + the Machine, whose lead singer made her return to a festival after breaking her foot in April at the Coachella Valley Music and Arts Festival in Indio, California.

“I keep forgetting I broke my foot,’’ Florence Welch said. “But it’s getting better.’’

She ran across the stage barefoot as she belted songs from “Shake It Off’’ to “Sweet Nothing,’’ her collaboration with Calvin Harris.

Welch was in a celebratory mood - probably because of her new album this week - and she grew excited when she saw a fan’s sign that read, “Hug?’’

“Crowd surf and I’ll give you one,” Welch said.

The fan made it to the stage, where Welch met her and brought her up to hug the band and see the rest of her set, which closed with the upbeat hit, “Dog Days Are Over.’’

“I won’t jump ‘cause my foot is a little iffy. Doesn’t mean you can’t!’’ she exclaimed.