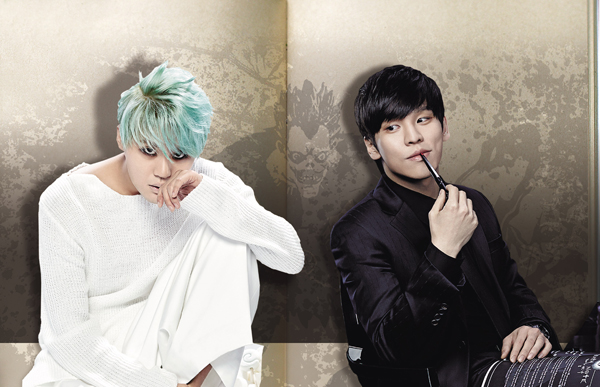 Two musical titans are meeting on stage in the upcoming production of “Death Note,” based on a popular Japanese comic of the same name.

And the response from fans has been explosive.

The first and second rounds of tickets sold out as soon as they were released online, meaning that 60,000 (roughly 70 percent of all the seats) have already been reserved.

The titans in question are Kim Jun-su and Hong Kwang-ho, who will play the musical’s lead characters L and Light, respectively.

Light is a high school student who one days finds the Death Note, a supernatural object that kills a person whose name is written on it. Light tries to rule the world with this deadly notebook, while detective L tries to stop him.

Kim and Hong - the two most sought-after actors in the musical scene - have joined the show as the main cast. They will therefore go on stage 51 times until October, with no alternates.

It goes without saying that Kim, as a member of the K-pop trio JYJ, possesses enormous star power. His competency as a musical actor was recognized in “Mozart” and “Elizabeth,” both of which sold out all their tickets.

Hong, who debuted as a musical actor in “The Late Empress” in 2002, is known for his thunderous vocal power.

The JoongAng Ilbo, an affiliate of the Korea JoongAng Daily, met with the two celebrities early this month to talk about their latest roles.

Q. How do you feel about the fact that tickets to the musical are selling like hot cakes?

A. Kim: I’m very glad. I have to admit I was sort of worried because out of the six musical productions I have appeared in so far, this was the largest ticket opening.

Also, since the show takes place in Seongnam, Gyeonggi, I thought it would be too far for those who work in Seoul to come.

Hong: I was also surprised to hear the news when I was in England. I decided that Jun-su being considered to have the strongest star power was no joke.

The musical has a single cast, which is rare. Do you feel pressure about this?

Kim: It was something I’ve always wanted to try out. I know it comes with a large responsibility, but I also feel proud of that.

The biggest advantage of a single cast is that you can choreograph your moves perfectly with your partner. Even the smallest difference, such as the timing when you say a line, can influence the audience’s interpretation. But [a single cast] can prevent that kind of confusion.

Hong: I think we can stage a more complete show. I believe we won’t go through any illness or accidents.

How is the chemistry between you two?

Kim: My voice is better accompanied by male vocals rather than female vocals. The uniqueness in my voice develops a nice harmony with Hong’s classical masculine voice.

Hong: Jun-su is always well-prepared on top of his great singing ability. I think I’m getting a free ride from him.