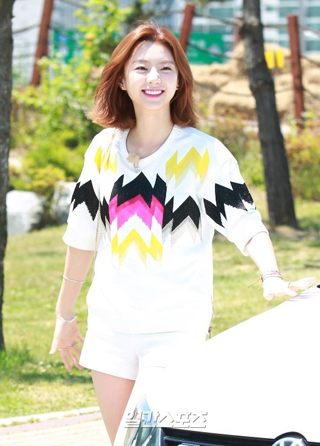 Singer-turned-actress Park Soo-jin and singer Lizzy from girl group After School will continue to host Olive TV’s “2015 Tasty Road,” a reality program that reviews local and overseas restaurants, even after the program is set to change from its original format this year.

“The program will go on break from July 11 to 18 to reorganize,” said a person affiliated to CJ E&M, the company that is in charge of the food channel Olive TV, to Ilgan Sports on Saturday.

“We want to change from the format used in the first half of the year to the new one that will be used in the latter part of the year. However, the two hosts for the program will remain.”

In the program, Park and Lizzy visit various eateries both in Korea and around the world. In the most recent episode, aired Saturday, they visited Australia to explore restaurants in Brisbane.

There were many rumors about Park stepping down from the program after she announced her engagement to actor Bae Yong-joon in mid-May. However, the production staff and her talent agency, KeyEast Entertainment, all denied the rumors.

Park has been responsible for hosting “Tasty Road” since it first began in October 2010, though her host partner has changed several times.