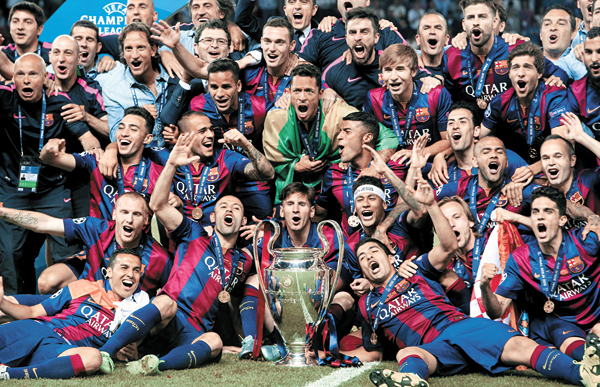 BERLIN - Barcelona’s mighty attacking trio of Lionel Messi, Luis Suarez and Neymar won the Champions League on Saturday with a 3-1 victory over Juventus that showed the beauty of fluent and attacking football after days of scandal that have tarnished the sport.

The Spanish champions dominated the game, but the Italian team played its part by fighting back from a goal down and seeking to match the complex spells woven by Barcelona’s talented players. But Juventus could not hang in there when Barca accelerated into an unmatchable rhythm.

The Messi-Suarez-Neymar axis completed the season with a combined 122 goals - and now European winners’ medals to join their league and cup ones.

Three years after Pep Guardiola left Barcelona and after last season ended without a trophy, Luis Enrique matched Guardiola’s 2008-09 feat of winning a treble in his first season in charge, suggesting the Catalan giants could be ready for a new period of European dominance.

With its first Champions League triumph since 2011, Barca has won European soccer’s top trophy four times in the last decade.

Andres Iniesta has participated in each final and the midfielder is also celebrating his second treble. Iniesta played a deep defensive midfield role in Berlin as the strikers caused havoc in the panicky Juventus defense.

“We won’t see this happen again very often,’’ Iniesta said. “Six years later we did [the treble] again. All my words fall short. Let the people enjoy this Barca.’’

Few will be enjoying the victory more than Suarez.

The Uruguayan striker began the season in shame, signed with Liverpool for $110 million despite being handed a four-month ban by FIFA for biting an opponent at the World Cup. He powered in Barcelona’s second goal in the 68th minute after Messi’s shot was palmed away by goalkeeper Gianluigi Buffon.

“When you come to a team like Barca, you know that you have come to win,’’ Suarez said. “This is a dream.’’

Suarez is rarely far from controversy, however. Twice he writhed around in agony, winning free-kicks and feigning serious injury. Juventus fans yelled derision when he recovered miraculously after wasting minutes.

Just like Suarez, Neymar has collected the top prize in club soccer for the first time after two years at Barcelona.

Neymar had a goal disallowed for a handball, but with the final going into a seventh minute of stoppage time, the Brazilian striker found space to score again as Juventus desperately sought a leveler, leaving its defense bare. This time it counted.

For Juventus there was no third European title, just the unwelcome record of being the first team to lose six finals. Still, the season ends with a domestic double

“While we’ve played a lot of finals, a lot of us had never played a Champions final,’’ Juventus midfielder Claudio Marchisio said. “There was a bit of fear.’’ AP