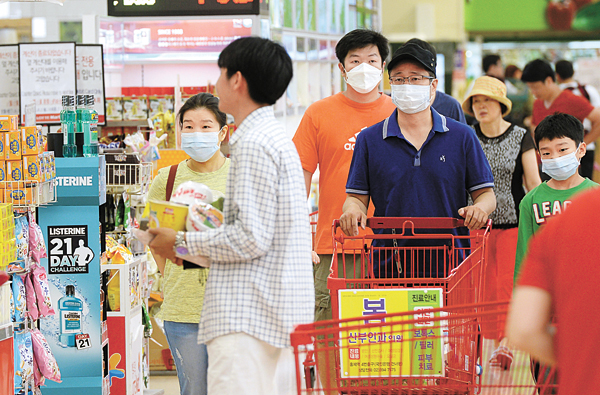 Consumers wear surgical masks as they shop at a discount store Sunday in downtown Seoul. Concerns over the spread of MERS continued to grow over the weekend after a fifth patient died. [NEWSIS]

A local restaurant owner in Gangnam, southern Seoul, appealed to his friends Sunday to help support his business amid the recent outbreak of Middle East respiratory syndrome (MERS), which has convinced people across the city to remain indoors and drastically affected local operations.

On his Facebook account, the 40-year-old businessman stated that, in running his restaurant over the past four years, he has faced numerous challenges, but nothing like this.

“There’s no one [on the streets of Gangnam],” he wrote over social media. “If this continues, every store around us is likely to close shop.”

Fear and worry has washed over Songpa since Friday, after the Seoul Metropolitan Government announced that a doctor who works at the nearby Samsung Medical Center in Ilwon-dong, Gangnam, recently had dinner with his wife at Garden Five, one of the area’s biggest malls.

Korea’s first MERS patient, who caught the virus last month while on a 16-day business trip to the Middle East, had visited four domestic hospitals by the time he began exhibiting symptoms and was correctly diagnosed.

Samsung Medical Center, where it was eventually confirmed that he had MERS, was the fourth.

Panicked by the news, many parents picked up their children early from kindergarten, and some elementary schools decided to close for a minimum of three days.

Garden Five is usually packed with shoppers and visitors, especially on the weekend, but the announcement saw a dramatic drop in their numbers.

As the MERS scare deepens ? so far, five patients have died and 64 total have been confirmed to have the disease ? concern over the impact it might have on the economy has also risen.

On Sunday, Finance Minister Choi Kyung-hwan, who is also the deputy prime minister for economics, urged the public to stay calm and affirmed that the government would do all it could to cushion the blow from the outbreak on the economy.

“[The MERS situation] could have an effect on the economy if the situation becomes extensive and further spreads,” he said. “We are closely monitoring whether it could have an impact similar to the Sewol ferry disaster.”

“We plan to contain the MERS situation as soon as possible, with only limited areas affected, and it has been confirmed that this is not a virus that can spread through the air. We hope that this will not … unnecessarily constrict economic activity.”

But if it does, he added, the government will take preemptive action to limit the outbreak’s influence on the economy.

However, he stressed that at the current level, the government is not considering looking into a supplementary budget.

Still, many observers fear the current standstill could bode poorly for business.

Those disappointing figures prompted Choi, who took over as finance minister in June 2014, to quickly launch several aggressive economic stimulus campaigns, which include policy rate cuts.

The goal was to revitalize a domestic market put under pressure by the tragedy. Feeling the squeeze, the central bank cut the policy rate twice last year - first in August and again in October.

This year, the central bank cut the policy rate in March to an all-time low at 1.75 percent, and some experts predict it could seek out another this month.

Up until early last month, the central bank appeared confident that the economy was on a path to recovery, with consumption showing strong growth.

During a press conference following its monthly monetary policy committee meeting on May 15, Lee Ju-yeol, the central bank government, seemed optimistic that the policy rate cut made last year would begin to show tangible results in the second quarter.

“When we released our revised outlook [for economic growth this year] in April, we foresaw an economic recovery picking up after the second quarter, and after watching it closely, we have found that the situation is actually going in that direction,” he said.

However, current worries over the MERS outbreak could potentially overturn that course, just like the Sewol tragedy did. Struggling exports, which saw the steepest drop in six years last month, fell 10.9 percent from a year earlier. This will likely force the central bank to cut the policy rate.

“The economic recovery is slowing down at a much faster rate than anticipated on top of struggling exports,” said Jung Sung-tae, an analyst at LG Economic Research Institute. “The need for monetary policy countermeasures has increased as worries over the spread of MERS potentially contracts the domestic market further.”