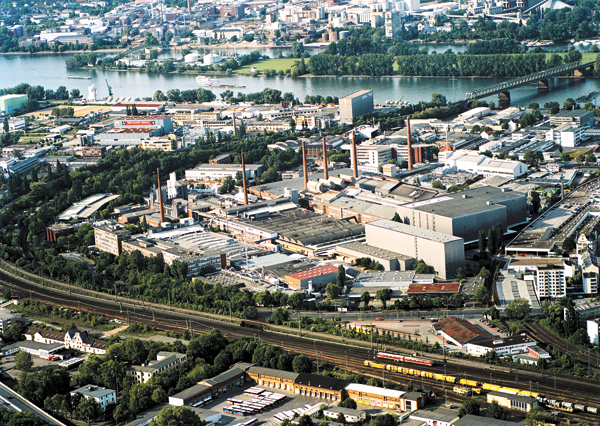 Specialty glass factories at Schott AG in Mainz. Provided by the company

Ever since the company’s establishment in 1884 as a glass technology research institute in the small city of Jena, about four hours from Mainz, Germany, Schott AG has maintained its top position in the global specialty glass market.

Beyond simple glass bottles in the late 19th century, the company developed the first thin advanced optics for microscopes and telescopes and tubes to store medicine in the early 1900s; fiber optic parts for lighting products in the 1960s; and nuclear parts, polymer for lithium-ion batteries and touch panels in the 2000s.

At the center of innovation, the company’s employees say, is a unique corporate governance structure in which the ownership and key decision-making powers are held by the nonprofit, publicly run Carl Zeiss Foundation as sole shareholder.

Foundation-based governance prevented many of the problems that frequently occur in family-owned companies and enabled Schott to focus on the principles of its founders, which are expected to be met by employees at all levels. It also has fostered consistent technological innovation through cooperation with nearby universities, research institutes and start-ups. 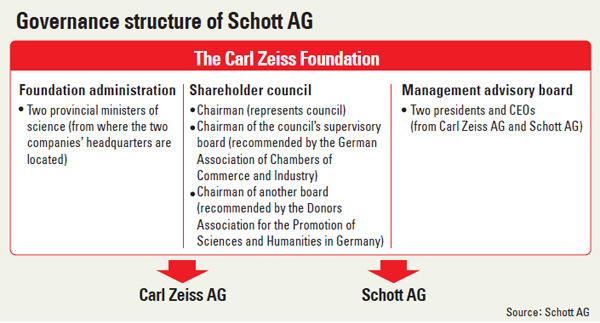 Jena-based Carl Zeiss Foundation also owns optical company Carl Zeiss AG. The two companies’ shares are listed on the regular stock exchange, but not traded for commercial purposes. The foundation is administered by the provincial government science ministries - the state governments of Baden-Wuerttemberg (where Carl Zeiss AG headquarters is located) and Thuringia (site of Jena) - via appointed members of the foundation’s administrative and decision-making council.

“There is no single owner. The idea that no person should own the company, but the foundation should was very new at the time when Schott’s founder announced the company would be owned by the foundation,” says Haike Frank, a spokeswoman of Schott. “I think [founder Otto Schott] wanted to solve - partially if possible - problems coming from family-owned companies by addressing these problems through foundation-oriented management strictly controlled by many committees in the late 19th century.”

She describes it as a uniquely German business model, citing Bosch with 90 percent of its shares owned by a foundation and the rest by the founding family.

Such corporate culture and traditions are very different from those in Korea, where family-owned conglomerates often face the so-called CEO risk. Despite great business performance, companies’ corporate images sometimes are tarnished by their owners’ behavior, such as embezzlement.

“Family ownership problems still occur at some German companies like Volkswagen, which is controlled by an 80-year-old owner family member,” says another spokeswoman for Schott, who asked not to be named. She adds that she is proud to work at a company that considers the pursuit of public good as important as making a profit.

The governance structure facilitates the mandatory allocation of company revenue for R&D projects in the region and publicly run research institutes, Frank adds.

Otto Schott and Carl Zeiss, the founders of Schott AG and Carl Zeiss AG, jointly established the foundation and wanted a certain portion of the two companies’ dividends to be used for R&D projects with universities, start-ups, and industrial and basic science research institutes located in Jena and other nearby cities with strong optical technologies.

The allocation changes annually depending on revenue, but spending for non-corporate research is a must under the annual plan of the foundation’s administrative council.

The branch works with the Otto Schott Institute of Materials Research at universities in Jena and Mainz, and the Fraunhofer Institute’s Jena branch, and industrial technology research institutes run by private companies.

“These rules and regulations are like the company’s ‘constitution’ and apply to all parts of the Schott Group,” adds Frank.

This helped not just the company’s technological innovation, but also the community and local economy.

“Young people come to Jena just to open their start-ups, thanks to local hidden champion companies like Schott that jointly put out funds little by little every year for those start-ups, as well as long-term R&D projects in basic science and original industrial technologies,” says the Schott spokeswoman. “Government is just one participant in such initiatives. Jena residents usually think that such initiatives greatly helped in making the city the world’s mecca for the glass and optical industries, and in revitalizing the city’s society and economy.”

According to data compiled by the government of Jena in April, gross production grew at an annual average of 9.1 percent from 2000 to 2011 and the city has become the biggest exporter in the province of Thuringia.