Soju with a bit of fruit flavor the rage in 2015

Soju with a bit of fruit flavor the rage in 2015 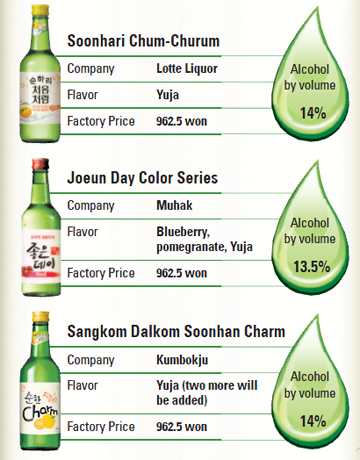 Lotte Mart at Seoul Station in central Seoul around lunch time on May 26 was crowded with office workers doing some grocery shopping during their breaks. People stopped at the liquor section where workers were stocking shelves with Soonhari Chum-Churum. Choi Hyun-kyung, who works nearby, said, “I visited more than 10 convenience stores and smaller supermarkets and I didn’t even see one bottle. I finally got it today!” She grabbed two bottles of Soonhari.

Soju makers’ war over alcohol levels in their products that began last year has evolved into the battle of mixed sojus, also known as “mixju.”

Mixjus are fruit-flavored sojus and they are categorized as liqueurs.

Last year, the alcohol levels in sojus were lowered to suit changing tastes of consumers. The mixju syndrome is an extension, with different flavors added.

The star of mixju syndrome, Lotte Liquor’s Soonhari, was released on March 20. Soonhari’s alcohol level is 14 percent, with 0.1 percent yuja (citron) extract added. Lotte strategically unveiled its yuja-flavored soju in Busan, which is considered the epicenter of low-alcohol drinks.

In Busan, low-alcohol whiskey Golden Blue has 50 percent of the whiskey market, and Joeun Day, a soju with a 16.5 percent alcohol by volume (ABV) level, has 75 percent of the soju market. Standard soju has an ABV of 17.5 percent.

Lotte Liquor set up a pop-up Soonhari Pub near Busan’s Kyungsung University to market the new product to young people.

Lotte Liquor, which currently controls 14 percent of the 1.6 trillion won ($1.4 billion) domestic soju market, is buoyed by Soonhari’s popularity. Mixju syndrome spread across the nation and the liquor is in short supply.

“Our sales of soju declined about 5 percent in March, but they rose 5.3 percent in April and 10.7 percent last month compared to a year earlier,” a managing director of one superstore told the Joongang Ilbo.

“Even though the factory in Gangneung is in full operation, we can’t handle the supply shortage problem,” Yang Moon-young, head of marketing at Lotte Liquor, told the Joongang Ilbo.

Young drinkers share information about where to find the brand via SNS. “I bought a bottle of Soonhari at Lotte Mart near Daeduk Science Valley Saturday night at around 10pm,” read one SNS post.

“I finally bought two bottles of Soonhari after getting information on Facebook,” said Choi Hyun-woo, an office worker in Ilsan.

Other soju brands have launched fruit-flavored sojus to cash in on the trend.

Muhak Soju, which controls more than 70 percent of the market in Busan and South Gyeongsang with its 16.5 percent ABV Joeun Day, announced a new lineup called Joeun Day Color Series on May 12. It includes three different flavors: pomegranate, blueberry and yuja.

The company released the Joeun Day Series in the capital area and North and South Gyeongsang provinces. It can’t be bought retail and is only available at restaurants and bars.

Kumbokju, whose Charm Soju is the most popular brand in Daegu, released a yuja-flavored mixju with 14 percent ABV called Sangkom Dalkom Soonhan Charm on May 18. Lee Jin-wook, marketing manager at Kumbokju said, “We released a soju-based cocktail to meet customers’ demand for weaker alcohols. We plan to release two more flavors in June.”

Hite-Jinro, which once said it wasn’t interested in the mixju fad, is changing its mind. “The sales department, retailers and customers are strongly demanding the release of a mixju,” Kim Seung-rok, a manager at the company, said. “Technically it takes less than few days to release a new liquor and we will move on once we are sure that the popularity of mixju will continue.” The company released a summer product called Chamisul Apple in 2012 that was very successful. Jinro Group, the predecessor of the company, released fruit-flavored sojus Cherry 15 and Lemon 15 in 1995.

Only Bohae, which has a 5 percent share in the domestic soju market, is ignoring mixjus.

Instead, Bohae launched its 9:30pm brand in Seoul and Yipsejoo Buradeo in North and South Jeolla with a two-track marketing strategy. It emphasized 9:30pm’s big size and refreshing image in the capital area, while the Yipsejoo Buradeo’s campaign concentrates on local color and friendship in the Jeolla region. Both liquors contain 17.5 percent ABV.

Buradeo, which is the Korean pronunciation of the English word brother, was released on May 18. “The alcohol level of Yipsejoo Buradeo is lower than the original Yipsejoo,” Kim Jeong-su, marketing director at Bohae, said, “and the saved costs from the lowered ABV will be returned to society by creating jobs and culture programs.”

The retail industry is divided on the future of flavored sojus.

A business insider told the Joongang Ilbo, “It is true that Soonhari is getting popular and people call it the Honey Butter Chip of soju. It is definitely a trend that consumers prefer lower alcohol drinks.”