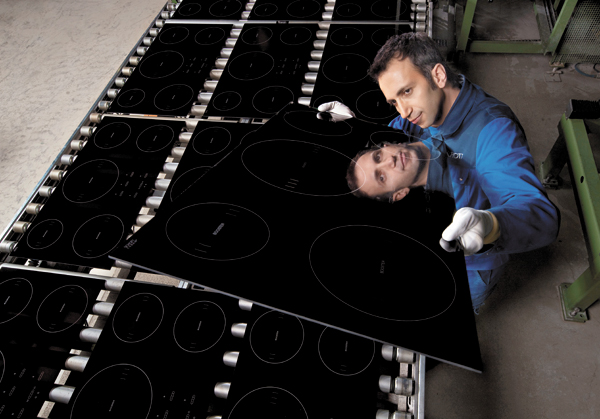 MAINZ, Germany - On a gentle spring day, a glass-melting tank was boiling around the clock at more than 1,000 degrees Celsius (1,832 degrees Fahrenheit) in central Mainz, a city in southwest Germany about a 90-minute drive from Frankfurt International Airport.

The melted glass in the tank is pressed into 4-millimeter (0.2-inch) plates by steel rollers. The boiling tank shuts down only for repairs. 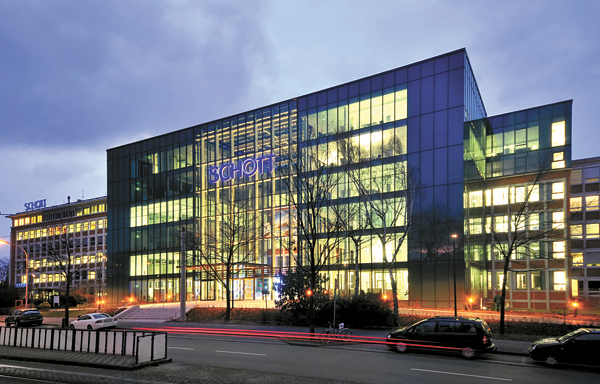 Until the glass sheets cool, no workers are needed. Five employees at the other end of the line inspect the strength, surface and size of the glass. A few others come in and out, checking and adjusting robots at the smart factory.

The glass melting tank is at the headquarters of Schott AG, a so-called “hidden champion” company and one of the world’s largest specialty glassmakers that provides insulation parts and glass panels to major global manufacturers.

These days, such companies are known for flexible management and adapting quickly in a fast-changing industrial scene.

“Schott has more than 60 years of experience in specialty glass, and it now produces its glass panels completely automatically,” says proud Schott AG employee Matthias Stubenrauch. “Yes, it’s a smart factory.” Most of the 1,000 production workers at the Mainz plant are involved in quality control, maintenance and repair of robots and their networks, and packaging the finished products.

“After automating the production process, the amount of defective glass dropped below 15 percent,” says Stubenrauch.

“We worried about what would become of our employees when we decided to automate our production lines. But we decided to train them to become quality control experts.”

At the Mainz factory, Schott produces glass panels, applies a ceramic coating and bakes them again to be used as electric cooktops by major appliance manufactures like Siemens and WMF, and Korean companies Dongyang Magic and Cuckoo Electronics.

The glass ceramic panels can withstand temperatures in excess of 700 degrees Celsius, according to the company.

The world’s first electric cooktops were introduced in the 1940s using iron plates or coils. In 1971, Schott developed the world’s first glass ceramic cooktop brand, known as Ceran, in cooperation with Miele.

Today, Schott’s cooktops account for more than 50 percent of the business-to-business market worldwide, making the company one of the three largest glass ceramic producers in the world along with Corning in the United States and NEG in Japan.

The company had sales of 1.87 billion euros ($2 billion) in 2014, of which 86 percent came from outside Germany. The company had sold nearly 130 million cooktop units worldwide as of April, since its first production in 1973.

“Everybody said we were crazy, that cooking on glass was impossible. But in fact, our glass ceramic is not glass,” says Stefan Marc Schmidt, vice president of marketing and sales for the home tech division at Schott. “We do a lot of things to stay No. 1 in sales and maintain our top position by going into new markets and generating demand there. Even if it takes time, we want to be the first one in new markets.”

Schmidt cites Korea as an example of a market that Schott succeeded in entering and generating demand. “When I first visited Korea 10 years ago, very few cooktops used glass ceramics,” he says. “If found, they were imported German products.”

Asia is Schott’s second-largest market representing a quarter of its sales (480 million euros) in fiscal year 2013-4, and Korea is the company’s fourth-largest Asian customer (31 million euros) behind China, Japan and India.

However, Korea is especially significant for Schott’s long-term sales as more households switch from gas to electric cooktops for health and safety reasons.

“Korea is the fastest-growing market in Asia, where we have seen double-digit growth every year since we stared selling our glass ceramic products in early 2000s,” says Stefan Hergott, director of sales at Schott Ceran Asia. “But we’re still a small player. According to our study, about 1.6 million households buy cooking devices every year in Korea. Until very recently, demand was solely based on gas products. In the future, we hope to grab a good share of the market, maybe up to 70 percent of that.”

Hergott says the Chinese market is nice in terms of sheer size, but it’s not Schott’s main target because gas has long been an important part of the cooking culture.

“We focus on markets like Korea, where cooking habits and trends match our product tier and people accept new things,” he adds, saying Korea’s slow-cooking techniques are a good match for Schott’s cooktops.

Seeing Korea as a new stronghold, Schott recently started producing panels for gas cooktops and hybrid gas and electric models specifically for Korea to attract customers that must have a gas flame.

“Korean consumers are more willing to accept new things than people in some other markets thanks to its digital society,” he continues. “It is a very big advantage for Korea. I wouldn’t say the country is a test-bed, but the Koreans can be trendsetters, which helps us a lot in starting new things and getting other markets to use more electric cooktops.”

To attract IT-savvy Korean consumers, Schott is currently in discussions with kitchen appliance makers to release a digital cooktop with touch panels as early as next year.

Besides ceramic cooktops, Korea is significant market for Schott when it comes to other special-purpose glass used in flagship industries, including mobile devices, shipbuilding, biomedicine and health care.

Schott’s advanced optics affiliate has recently entered a research contract with Korea Photonics Technology Institute, Gwangju Institute of Science and Technology and Gwangju city government in the development of products for Korean customers.

LG Chem last year reached a technology implementation contract with Schott to work on precise, specialty glass as part of plans to invest 3 trillion won in its advanced material complex and build seven factories that will manufacture LCD panels.

To expand its presence in Korea, Schott has started exploration committees with partners and decision makers that have expertise in regulations, but regular government assistance will help, the company says, adding that it hopes the Korean government will become more open and communicative with foreign companies about regulations and standards.