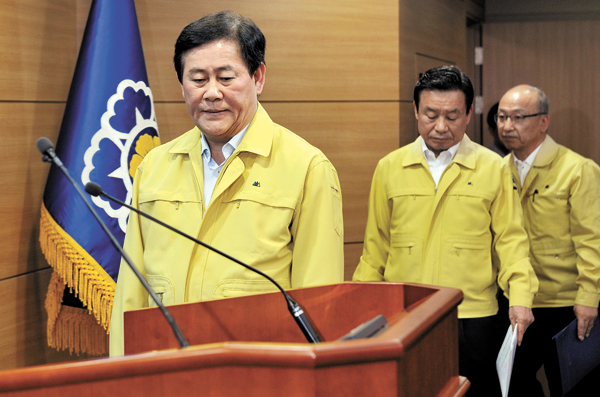 Struggling amid the outbreak of Middle East respiratory syndrome (MERS), health authorities on Sunday disclosed the names of 24 hospitals that have treated MERS patients, breaking a long-held silence that the government claimed was necessary to prevent fear among the public.

Despite consistent demands, the government initially refused to release the list of medical facilities until local governments and the media threatened to provide it first.

“We are disclosing the names of the hospitals where MERS patients tested positive in order to secure public safety,” acting Prime Minister and Finance Minister Choi Kyung-hwan said at a press briefing Sunday at the government complex in Sejong City. “It is inevitable to restrict those hospitals given that the disease spreads within medical facilities.” 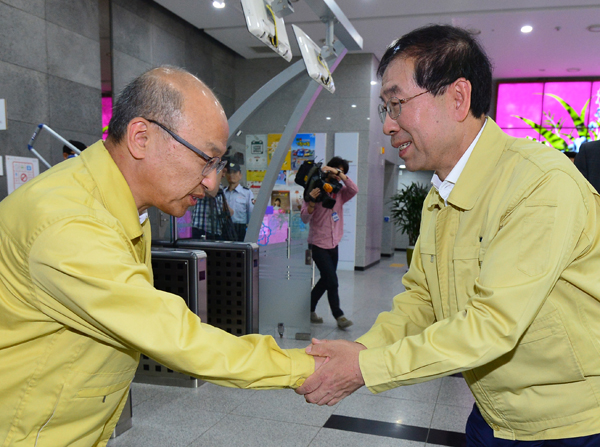 Health Minister Moon Hyung-pyo, left, greets Seoul Mayor Park Won-soon in Sejong City on Sunday after announcing that the central and local governments will form a consultative group to prevent the further spread of MERS. [NEWSIS]

Sunday marked Choi’s first press conference since MERS was confirmed in the country on May 20, after a 68-year-old man tested positive following his return from a 16-day business trip to the Middle East.

Choi added that President Park last week had stated the need to transparently disclose the names of the affected medical facilities.

“We are disclosing this list now because we needed to prepare a report system and isolation rooms in hospitals in advance,” he added.

However, Sunday’s announcement did little to soothe public discontent.

The briefing, which was supposed to be held at 10 a.m., ended up being delayed 20 minutes, with the Prime Minister’s Office citing that officials needed to complement the statement. When it came close to 10:20 a.m., the office again delayed its announcement to 11 a.m.

The government had reportedly checked the hospitals on the roster, though even after an hour, Choi’s disclosure incorrectly listed the names or locations of the hospitals. The health authority released a corrected version a few hours later.

The Ministry of Health and Welfare has also decided to establish a consultative group among local governments of Seoul, Gyeonggi, South Chungcheong and Daejeon - where MERS patients have been confirmed. The ministry is sharing the right to confirm MERS cases with local health and environmental institutes.

“The central and local governments will share all information to prevent the disease’s spread and has decided to set up a consultative body immediately,” said Health Minister Moon Hyung-pyo. “In the body, we decide which roles each government plays and discuss general measures as well.”

Leaders of those local governments welcomed the decision.

“I feel it’s a little late that the central government is now fully engaging in a preventative effort and disclosing the right information, but I think it’s great to do so anyway,” said Seoul Mayor Park Won-soon. “The best medication for quarantine efforts is transparency, and the Seoul Metropolitan Government will cooperate with the central government.”

“At this stage, what matters from now on are the hospitals,” added Gyeonggi Governor Nam Kyung-pil. “To secure enough isolation beds, we need cooperation from private hospitals, and there should be strong support from the political circle.”

However, the Health Ministry appears to be facing an uphill battle in implementing those measures, with the number of confirmed and potential MERS patients rising day by day.

Korea’s first MERS patient, who caught the virus last month while on a 16-day business trip to the Middle East, had visited four domestic hospitals by the time he exhibited symptoms and was correctly diagnosed.

The 68-year-old began to show symptoms on May 11, and so far, most of the infections are reported to have occurred at the second hospital he visited, Pyeongtaek St. Mary’s Hospital.

However, most of the newest patients came into contact with the disease while being treated at Samsung Medical Center in southeastern Seoul, the fourth hospital he visited, though he is not thought to have transmitted the virus to anyone there.

The number of MERS patients who became infected there has been on the rise since Patient No. 14 visited the hospital’s emergency room, where 17 of the country’s total 64 patients tested positive. The Samsung Medical Center, however, denied that its employees took poor quarantine measures.

“There were no grounds to suspect MERS because [Patient No. 14] had pneumonia and had not traveled to the Middle East,” said Song Jae-hoon, the hospital’s director.

Source: Ministry of Health and Welfare