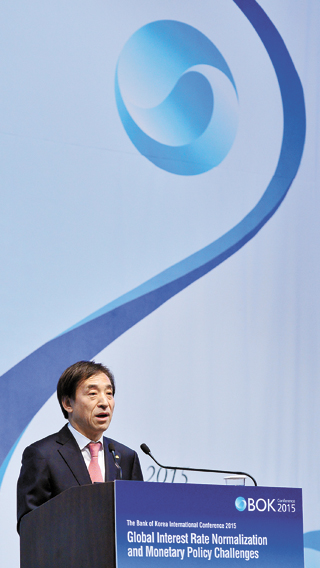 Bank of Korea Gov. Lee Ju-yeol said an interest rate increase by the U.S. Federal Reserve would increase instability in the Korean financial market and dampen the real economy. The comment came ahead of the central bank’s monthly monetary policy meeting Thursday.

At the central bank’s international forum in Seoul on Monday, Lee said increased liquidity in international financial markets resulting from monetary easing policies has encouraged many market participants in Korea to increase investment in high-risk products and get more loans at historically low rates.

“The stance of [Korea’s] monetary easing policy may have led market participants to become weak in response to a shock from a possible rate hike,” said Lee. “If the U.S. Fed normalizes its currency policy and rates rise much higher than expected, it would lead to a massive increase in the burden of repaying debts by households, corporations and financial institutions.

“This could lead to instability in the [Korean] financial market and be a factor in shrinking the real economy.”

Some domestic and foreign analysts forecast the Korean central bank might shave off 0.25 percentage point to push the benchmark rate to another all-time low of 1.5 percent as the Korean economy recently has been faced with unfavorable factors such as the dampening of consumer spending due to the outbreak of Middle East respiratory syndrome (MERS) and the weakness of exports.

Asked whether the infectious virus could affect the upcoming decision by the central bank, Lee said, “I am considering everything.”

However, market experts are split on the impact of a U.S. central bank rate hike on the Korean economy. Some say it may not have as huge of an influence as Lee and others expect.

There is speculation the Fed might raise its interest rate in September, while Christine Lagarde, head of the International Monetary Fund, recently urged the Fed to wait to raise its key interest rate until next year.

The Korea Economic Research Institute (KERI), run by the Federation of Korean Industries, released a report Monday saying the BOK should determine base rate policies based on the domestic economy, rather than what the Fed might do.

Based on its analysis of stock and bond transactions in 22 countries after major global financial policy changes from 1993 through 2013, the KERI report found that global policy changes had a limited impact on the Korean economy, because foreign investors pulled capital out of the stock market and expanded their purchases of bonds.

In data from the past two decades, capital inflow to the Korean stock market began slipping during the second year of the U.S. Fed’s short-term interest rate hikes, but the cumulative declines were no more than 0.1 percentage point for the first 40 months. Meanwhile, foreign capital flew into the local bond market immediately after the rate hike and total growth was 0.4 percentage point for the first 40 months.

“Similar to past examples, the exodus of foreign capital from the Korean market following the U.S. Fed’s rate hike in the second half won’t be that serious in the long term,” wrote Kim Seong-hoon, a senior researcher at KERI. “That means Korea has enough time to manage our monetary policies based on the domestic real economy, even after the Fed retracts its stimulus policies.”

The Korean private sector, which already suffers from sluggish exports and a weak yen, is desperate for low rates, citing concern that the Fed’s rate hike would cause a mass exodus of foreign capital from stocks and a general slowdown of investment in Korea.

A survey by the Korean Chamber of Commerce and Industry of 300 manufacturers showed that almost 79 percent said they are not prepared for a Fed rate hike.

Those who answered that they are preparing for a Fed increase said they are expanding cash assets and closely monitoring market trends.

When asked about local monetary policy, 78 percent of companies said the BOK should keep base rates low so they have more room to make additional investments through loans.

The companies also said they hope the government will support them against currency risks.

“Although the U.S. Fed has emphasized it will raise the base rate at a slow pace, the dollar appreciates and global financial markets are very sensitive,” said Cho Dong-chul, head economist at the state-run think tank Korea Development Institute. “Local companies should make sure to prepare mid-to-long-term financing plans.”