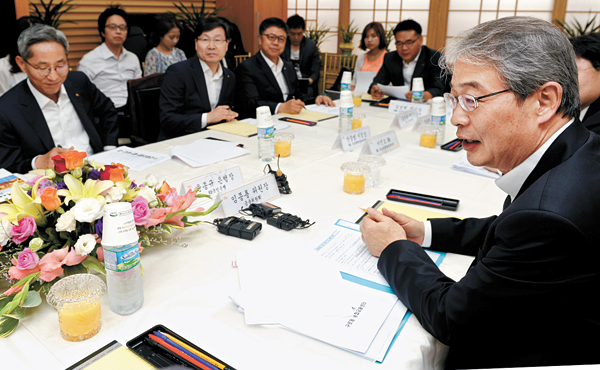 Financial Services Commission (FSC)Chairman Yim Jong-yong pledged to increase oversight of local banks issuing so-called tech loans for SMEs in the country, following criticism that the money has been going to conglomerates or enterprises with no relevant technologies.

As one of the Park Geun-hye administration’s key policies to support the nation’s small and medium-sized companies, the new loan program was designed to issue low-interest loans for small ventures or start-ups that lacked capital but had cutting-edge technologies. The annual interest rate, 3.65 percent on average, is also lower than the average 4.1 percent of the previous loans for SMEs.

Under government pressure, local banks increased the number of new loans issued to local SMEs. According to the FSC, the number of enterprises receiving loans jumped from 486 in July 2014, when the program first launched, to 39,685 in April, totaling 25.8 trillion won ($22.9 billion).

But after a full-scale inspection in April, Yim said the commission found local banks were providing the loans to companies unrelated to high-end technologies, such as wedding companies, real estate brokers, or even those running guesthouses. 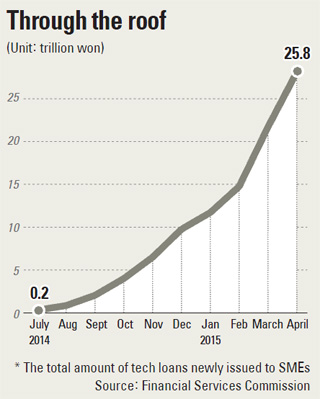 Some banks also converted loans already issued to conglomerates or large companies into the new program, in order to boost the number of recipients.

“There is criticism that [some banks] converted the loans already given to companies into the new program,” Yim said during his visit to a local branch of KB Kookmin Bank on Monday in Seoul. “We will exclude those cases in evaluating the performance of banks in terms of increasing tech loans.”

Banks focused on boosting the number of loan recipients because the government used participation in the program to assess their performance.

As a result, banks raced to issue loans without thoroughly inspecting companies, the commission said.

Yim warned that issuing loans this quickly could increase the amount of risk in the loan departments at local banks.

“All of the banks issuing the tech loans should launch a comprehensive system in risk management, through regular monitoring, or analysis [on the companies that received tech loans],” Yim said.

“Although the average default rate of the tech loans currently ranges from 0.02 percent to 0.03 percent, banks should be more thoroughly prepared to manage risks,” he added.

According to the commission, other problems were also found in the management of the loan program.

Despite the shoddy management of the loan program, Yim said it remains a critical part of the government’s efforts to boost the economy.

“The tech program is not just supporting companies with high-end technologies,” he said. “It is reforming the overall system of the credit system of local banks.”