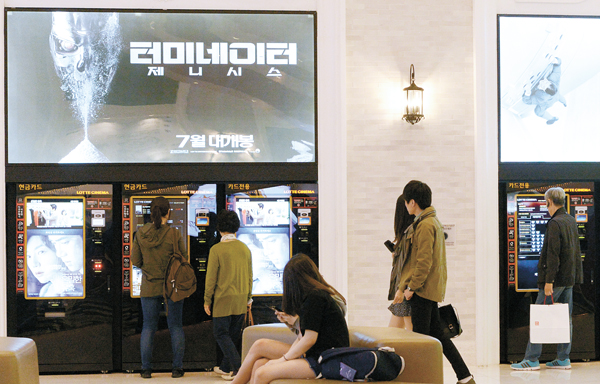 Lotte World Mall’s movie theater reopened May 12 after being closed for six months by the city of Seoul due to safety concerns. [NEWSIS]

A fire broke out at Lotte Mart in Lotte World Mall in southeastern Seoul shortly after midnight Monday that caused the evacuation of about 70 people from a movie theater. The fire was quickly extinguished by Lotte employees and caused no injuries.

According to the company, a smoke alarm went off on the second underground level of the discount store at 12:45 a.m. due to what appeared to be an overheated refrigeration unit.

The fire was already out when Songpa District firefighters arrived at the scene five minutes after the emergency call. Firefighters inspected the scene to ensure it was safe.

“We are going to thoroughly investigate the cause of the fire and look at every one of our refrigerators and refrigeration appliances,” said a Lotte Corporation spokesman. 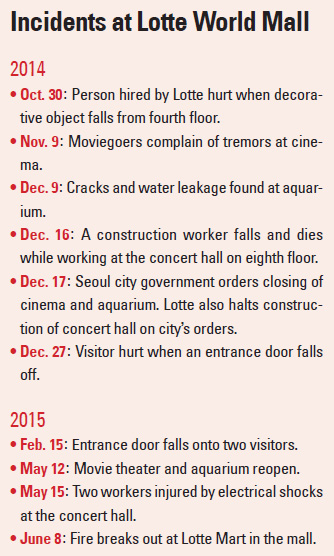 It was the latest in series of incidents that has plagued Lotte’s new mall complex in Jamsil.

A worker was hurt by a falling decorative object at Lotte World Mall a day before the mall’s official opening in October and moviegoers complained of a tremor at the cinema last year.

Cracks and leakage were found at the aquarium in December, but it was the death of a worker who fell on the job in the concert hall that caused Seoul city government in December to shut down the cinema and aquarium and order a halt to concert hall construction.

The city allowed the aquarium and cinema to reopen after inspections by in May, but the accidents did not stop, prompting the government to issue a “verbal warning.”

Shortly after the aquarium and cinema reopened last month, workers at the concert hall were injured by shocks from an electrical cord.

“We are very sorry to have caused concerns to our customers,” Lotte said in a statement on Monday.