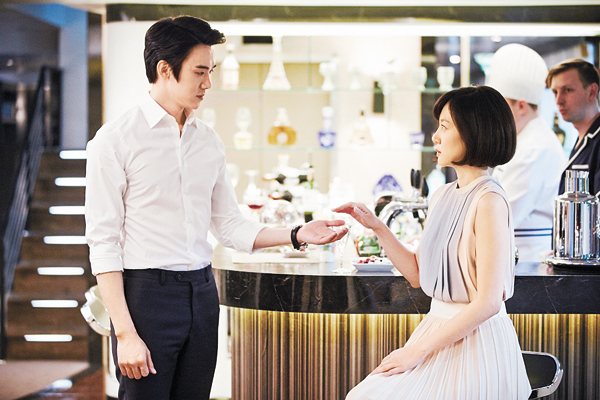 Disaster movie “San Andreas” opened big in first place at Korean box offices over the weekend with an audience of 724,447, despite locals shying away from public places due to a recent outbreak of Middle East respiratory syndrome (MERS) in the country.

According to the state-run Korean Film Council on Monday, the epic amassed 8 billion won ($7.1 million) in Korea from more than 800 screens nationwide.

The movie, directed by Brad Peyton, depicts a 9.0-magnitude earthquake wiping out the western coast of the United States. Professional wrestler and action star Dwayne Johnson appears as Ray, a helicopter pilot called in for the rescue operation.

Two other Hollywood flicks, “Mad Max: Fury Road” and “Spy” each stepped down a notch to second and third place, respectively.

“Mad Max,” a post-apocalyptic film crafted by George Miller, pulled in another 276,102 viewers over the weekend, remaining in the top tier of the box office for four weeks.

Its admissions now total 3.4 million, or a little less than 30 billion won.

Paul Feig’s unconventional comedy “Spy,” which has Melissa McCarthy in the lead role, was seen by 250,000 moviegoers during the weekend in local theaters. Almost two million Korean viewers have now watched the film.

Directed by Yoon Jae-gu, the screen adaptation of Catherine Arley’s 1950s novel “Le Femme De Paille” (“Woman of Straw”), is a contemporary version of a Cinderella-style fairy tale, where a girl goes from rogue to vogue with the help of Prince Charming.

In the case of “Perfect Proposal,” up-and-coming actor Yoo Yeon-seok took on the devilish male leading role of Seong-yeol, who lures Ji-yeon (Lim), a woman desperate for money, into a scheme where she has to entice a billionaire in order for Seong-yeol to inherit his wealth.