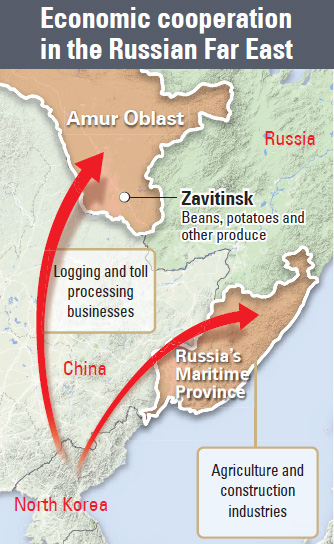 Investment in North Korean workers is soaring thanks to local governments in Russia and its citizenry.

“Wages for North Korean workers are inexpensive and the workers are very disciplined and easily managed,” Maxim Sherekin, the deputy minister at the Ministry for the Development of the Russian Far East, said in an April interview with Russian news agency RIA Novosti. “North Korea is prepared to provide Russia with unlimited manpower.”

A study on economic cooperation between North Korea, South Korea and Russia by the Korea Institute for Industrial Economics and Trade further explains Russia’s growing investment in workers from North Korea.

“Due to their country’s stringent control of internal affairs, North Korean workers do not raise problems in society,” the study determined.

A source from the Institute clarified, “Because they have been trained to work within a system, they obey laws, are very diligent and have a strong sense of responsibility.”

Employment in Russia is not ideal for North Korean workers. The annual sum of their wages comes to about $5,000, but 50 to 60 percent of this money is forcibly remitted by North Korea, which claims “loyalty funds.”

The remainder is then taken by the guard dispatched to the work place, the North Korean Embassy’s labor bureau and other parties. Eventually only $70 to $80 make it into the hands of a North Korean worker per month.

Despite these conditions, 47,364 of the foreigners authorized to work in Russia in the first quarter of this year were North Korean, according to the Ministry of Labor and Social Protection of Russia.

There were only two other countries that contributed more workers to this foreign work force: Turkey, with 54,730 Turkish workers in Russia, and China leading with 80,622 workers.

However, these numbers are expected to shift due to Russia’s disappointment with Chinese workers, which stems from a variety of issues, including Chinese workers polluting arable land.

In 2013, the government of Amur Oblast prohibited Chinese migrants from working in the region, and in the same year the government of Primorsky Krai, a region also known as Maritime Province, located in Russia’s Far East, openly announced that it preferred North Korean to Chinese workers.

Russia’s national government finally blocked Chinese workers from entering the agriculture sector and eradicated the living quarters for the ones who worked in forestry.

Sherekin made the administration’s inclinations clear.

“We can replace Chinese workers with North Korean workers,” he affirmed.

As the Vladimir Putin administration seeks to spur development in the Russian Far East, it is likely that the value of North Korean workers will increase.

In March 2013, Russia announced a socio-economic development program for the Far East and the Baikal Region by 2025. Its major objectives include the promotion of resource manufacturing industries, infrastructure projects, and agriculture in addition to agricultural produce manufacturing.

But with poverty rampant in parts of the Russian Far East and a deficit in manpower, achieving the program’s goals has been difficult.

There were attempts to encourage immigrants from Crimea and the Commonwealth of Independent States to the Far East, but because of the region’s relatively high cost of living for such workers, those efforts stopped.

Those efforts may have encouraged other problems as well.

“Friction may arise among [workers from] Turkey, Uzbekistan, Kazakhstan and other countries, where Islam is the most practiced religion, and the residents of Russia, where Christianity is the majority religion,” an official at South Korea’s Ministry of Unification said. “North Korean workers do not pose any political, security or other threats to Russia, so the demand for North Korean workers can only increase.”

Despite the cancellation of North Korean leader Kim Jong-un’s visit to Russia, economic cooperation between North Korea and Russia is only likely to increase.

On April 27, both nations held the seventh meeting of the Intergovernmental Commission for Trade, Economic, Science and Technology Commission. They also have plans to participate in a variety of cooperative business undertakings in energy, trade, tourism, infrastructure and agriculture.