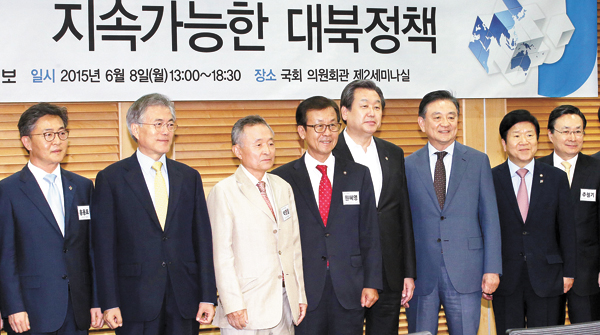 A sustainable policy on North Korea that can survive different administrations must be created by politicians from different sides of the ideological spectrum and presented to the public, a special National Assembly committee and the Korea Forum for Peace, Prosperity and Unification said Monday.

A group of lawmakers, including the heads of the ruling Saenuri Party and the main opposition New Politics Alliance for Democracy, and experts attended a seminar on Monday hosted by the National Assembly’s special committee on inter-Korean relations development and the private think tank. The event, organized by the JoongAng Ilbo, took place at the National Assembly.

After the seminar, a 10-point joint statement was announced by the bipartisan special committee and the forum, participated in by both conservative and liberal experts. They agreed that a sustainable North Korea policy must be established by the National Assembly and major political parties.

The July 4 Joint Communique in 1972 marked the first official accord by the two Koreas’ authorities regarding the principles and methods for national unification. The basic agreement from 1992 was designed to promote reconciliation and nonaggression.

In the statement, the lawmakers and experts urged the two Koreas to recognize each other as partners in negotiations and dialogue and resume government-to-government talks without conditions. To this end, they recommended the two sides stop criticizing each other and hold talks to ease military tension.

Urging the North to make efforts to become a normal member of the international community, the lawmakers and experts also agreed that a high-level consultative body composed of members of the ruling and opposition parties and the government should be established to forge a bipartisan, sustainable North Korea policy and to expand the special committee’s role.

They also urged the government and political parties to continue efforts to resolve the nuclear crisis, including the resumption of the six-party talks and sending humanitarian aid to the North, while also demanding Pyongyang allow separated family reunions on a regular basis.

In addition, they called on the two Koreas to have talks to come up with a way to resolve the standstill over the May 24 measures and normalize economic, social and cultural exchanges. Imposed to punish the North’s sinking of the South Korean warship Cheonan in 2010, the May 24 sanctions bar all exchanges and trade between the two Koreas. It is seen as a main obstacle in improving inter-Korean ties.

In his opening address, Hong Seok-hyun, chairman and CEO of the JoongAng Media Network and the adviser of the forum, expressed frustration with the stalemate. “When we, the very concerned party, do not make independent efforts to resolve the problems, which neighbor will offer help?” Hong asked. “The two Koreas must persuade their neighbors independently and confidently.”

Kim Moo-sung, chairman of the conservative ruling Saenuri Party, called for a bold resolution that will break the endless cycle of standstills between the two Koreas.

Moon Jae-in, chairman of the liberal opposition New Politics Alliance for Democracy, said his party will fully support President Park Geun-hye if she has a summit with North Korea’s young ruler, Kim Jong-un. Moon promised that the opposition will cooperate to realize any agreement that Park will make at the summit.

The heads of the political parties also said this year, marking the 70th anniversary of Korean liberation from Japan’s colonial rule and national division, must serve as momentum to improve inter-Korean ties.