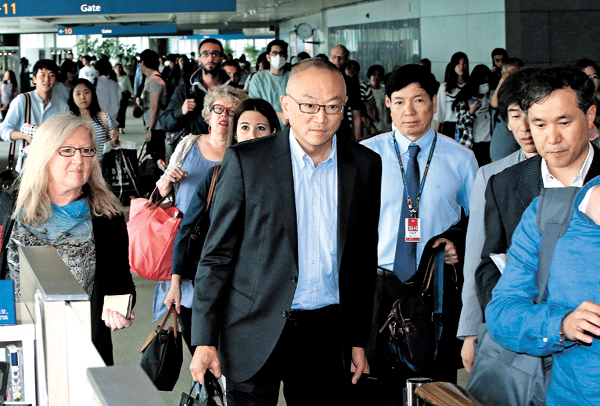 World Health Organization (WHO) Assistant Director-General Keiji Fukuda arrives at Incheon International Airport on Monday. Fukuda will co-head the Korea-WHO Joint Mission, which will take part in quarantine measures and MERS studies starting today. It will provide an official report on Saturday. [NEWSIS]

The total number of patients in the country infected with Middle East respiratory syndrome (MERS) has climbed to 87 and a sixth person has died, the Ministry of Health and Welfare announced Monday, with 23 additional cases confirmed.

The 80-year-old male, the 84th patient, had been hospitalized for pneumonia since March at Dae Cheong Hospital in Daejeon, one of the hospitals with known MERS patients. He died Monday, and had stayed in the same ward with Patient No. 16 from May 25 to 28.

Panic over MERS has spread nearly as fast as the disease itself, with a general hospital in Seoul now believed to be another potential base for it to spread.

Korea now has the second-highest number of MERS cases in the world after Saudi Arabia, with 1,026 as of Saturday, according to a tally by the International Society for Infectious Diseases. 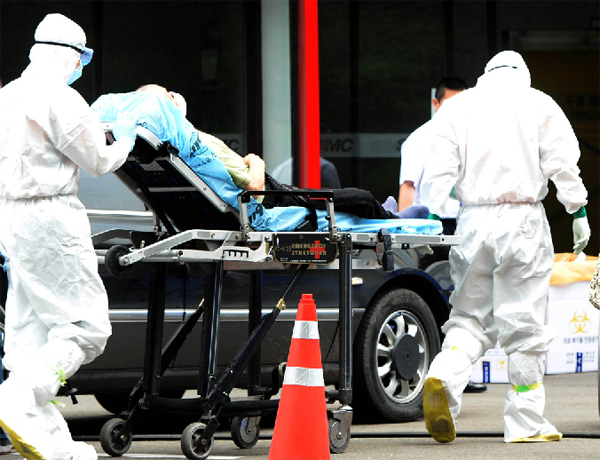 Ambulance workers in full protective gear transport a patient, who is thought to have contracted MERS, to the emergency room on Monday at Samsung Medical Center in Seoul. [NEWSIS]

That drops the United Arab Emirates, with 76 cases, down to third.

“We’ve confirmed 23 new MERS patients,” a ministry official said Monday, “and 17 of them were exposed to Patient No. 14 sometime between May 27 and 29, in Samsung Medical Center’s emergency room.”

Korea’s first MERS patient, who caught the virus last month while on a business trip to the Middle East, had visited four domestic hospitals by the time he began exhibiting symptoms and was correctly diagnosed.

Samsung Medical Center, where it was eventually confirmed that he had MERS, was the fourth, though he is not thought to have transmitted the virus to anyone there.

Spread within the general hospital so far appears to have solely come from Patient No. 14, who was treated from May 27 to 29 in the emergency room.

The health authority has played down the possible spread of the disease at the facility, but with little success: The ministry previously stated that 893 people there had been exposed to Patient No. 14.

“The number of patients who contracted the disease at Samsung Medical Center adds up to 34, and it may seem explosive, but it’s because the results from their examinations came all at once,” the official said. “But the virus was transmitted within the hospital, and we anticipate the increase will take a downturn soon enough.”

Also notable was that a teenager for the first time was among confirmed MERS patients in Korea. Patient No. 67, a 16-year-old, was taken on May 27 to Samsung Medical Center’s emergency room, where he underwent brain surgery and has since been treated.

The news raised criticism toward the Health Ministry, which had insisted that closing schools to prevent the disease from spreading was not necessary from a medical perspective.

“He [the teenager] had surgery and is in stable condition. He has not exhibited many MERS symptoms,” a ministry official said. “MERS is rare among the younger generations but it infects them to some extent, and it’s the first case reported in Korea.”

Crucial for health officials now is whether they will be able prevent those who may have contracted the disease at the hospital in Seoul from spreading it further. MERS cases have already expanded beyond the area where the initial patients were confirmed - Seoul, Gyeonggi, South Chungcheong and Daejeon.

On Monday, President Park Geun-hye paid a visit to the MERS countermeasure headquarters, set up at the Central Government Complex in Seoul, where she stated that experts must take a leading role to help curb the virus.

“To immediately cope with this constantly changing situation, the countermeasure headquarters needs to authorize experts with full powers,” Park said. “Let the response team have full rights over quarantine measures, including shutting down hospitals, as well as the right to demand administrative support.”

One of the 23 newly confirmed patients, Patient No. 81 was found to have tested positive for MERS after traveling to his home in Busan. The 61-year-old had reportedly taken care of one of his relatives at Samsung Medical Center from May 26 and came back to Busan on June 1 via a KTX train. The relative’s son, who stayed with Patient No. 81 and his father, also returned to his home in Bucheon, Gyeonggi, and tested positive in an initial test.

Patient No. 51, a 72-year-old woman hospitalized at the Pyeongtaek St. Mary’s Hospital - where 36 others were infected - had previously traveled back to her hometown in Sunchang, North Joella, while she was supposed to be in isolation. She was later confirmed to have MERS. The entire village, where about 160 people reside, was subsequently shut down.

As the disease has spread, it has become increasingly difficult for the government to keep track of every single potential patient.

Of the 23 most recent patients, a 75-year-old woman, Patient No. 76, was found to have contracted the disease at the Samsung Medical Center’s emergency room. She then went on to visit two other general hospitals, Kyung Hee University Hospital in Gangdong District and Konkuk University Medical Center in Gwangjin District.

She tested positive during her stay at Konkuk University Medical Center but was not quarantined at the time.

“[Patient No. 76] was at Samsung Medical Center, and she was on the list we acquired on June 3,” an official from the Korean Centers for Disease Control and Prevention (CDC) said Monday. “We called her twice on Saturday and Sunday, but she didn’t answer the phone, probably because she was at the other hospitals.”

“The Health Ministry is making calls to local governments,” she added. “If they can’t be found at home, we can take even more active measures by having the police trace them.”

The Health Ministry added that inspectors had been dispatched to the two other university hospitals for epidemiological investigations.

Criticism around the government’s lax handling of the disease increased across the political arena Monday, when the National Assembly held a hearing to discuss the outbreak.

“I believe the Health Ministry and the CDC were already aware that MERS was prevalent in the Middle East before the first patient tested positive on May 20,” said Saenuri Rep. Moon Jeong-lim, who is also a doctor. “But they didn’t guide or educate medical facilities or the public, and they must know there should be repeated education and training to be prepared, not just on the table.”

“The government lost many critical opportunities in the initial stage because it did not clearly set up a control tower and did not reveal information,” added Saenuri Rep. Park In-sook, who holds a doctoral degree in medicine.

“It’s irresponsible for the government to simply provide a list of affected hospitals to a frightened public and believe that people can make decisions on their own.”

The NPAD went so far as to demand the health minister step down.

“[Moon] can’t avoid being criticized for his irresponsibility and incapacity since he couldn’t even come up with proper measures after the disease .?.?. was reported,” said NPAD Rep. Jun Byung-hun. “He’s only an obstacle in handling the situation, and he must step down from his position.”

Moon has repeatedly expressed his regrets over the situation.

“We are not raising the level of crisis yet, but we will be prepared and raise the level as soon as it is needed,” the health minister said. “We judge that the spread of MERS is at its peak, and we will put in our best efforts to stop its spread.”

On Monday, the World Health Organization (WHO) stepped in. The ministry said experts from Korea and the WHO will set up a Joint Mission starting today.

The 16-man team is co-headed by Lee Jong-koo, the director of Seoul National University’s JW Lee Center for Global Medicine, and WHO Assistant Director-General Keiji Fukuda. The Joint Mission will handle epidemiological investigations, quarantine measures, discussion and analysis on the MERS coronavirus.

The team is scheduled to present its results to Moon on Saturday and hold a press briefing.