Back on the national squad, Hong looks to clear his name

Back on the national squad, Hong looks to clear his name 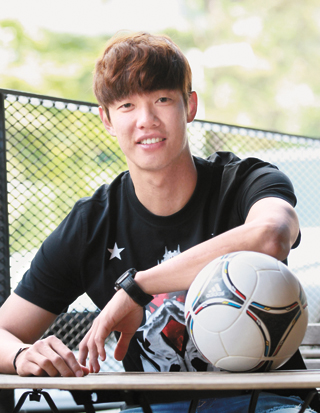 Some say that “time heals all wounds,” but try telling that to Hong Jeong-ho. The Korea national team central defender is still haunted by his experiences in the 2014 FIFA World Cup in Brazil.

Hong, who plays for FC Augsburg in the German Bundesliga, was a core defender in the World Cup last summer. The team failed to reach the Round of 16 with one draw and two losses, and the 25-year-old was one of the scapegoats. The former Jeju United player was injured at the time, and took painkillers before getting on the pitch. After the disappointing results, no one was on his side.

After the World Cup, national team coach Hong Myung-bo resigned from his post to take responsibility for the performances, which shocked Hong. The 186-centimeter (6-foot-1) center back said he hasn’t called his former coach because he felt so guilty.

After the World Cup, Hong went through rehabilitation for his injuries, and last November he was included in Ulrich Stielike’s squad for friendlies against Jordan and Iran. The Jeju-born player managed to assist in Korea’s 1-0 victory against Jordan, but didn’t impress.

Hong didn’t play with the national team for the next seven months, but now he’s back on the squad. Stielike tapped him for a friendly against the United Arab Emirates on Thursday and the Asian World Cup qualifier against Myanmar on June 16.

Before the national team left for Malaysia on Monday, Ilgan Sports, a Korea JoongAng Daily affiliate, met Hong last Thursday to talk about his life after the 2014 World Cup.

Q. It’s been a long time since you’ve held an interview with local media.

A. Everything I have said would be seen as making excuses for the past.

How serious was your injury during the World Cup?

In the friendly right before the World Cup, I hurt the top of my left foot. There was a bruise, [and] it didn’t really recover. Honestly, I couldn’t exercise before the World Cup. When reporters came to the training center, I just pretended to warm up and after they left, I just rested .?.?. and kept taking painkillers. For competitions like the World Cup, you are not even sure you’ll play well even if you’re at peak condition. But as I kept playing with the injury, I continued to lose my confidence.

Korean defenders were especially criticized for the 1-4 loss against Algeria.

My skills just weren’t good enough. If I was fully recovered it could have been different, but for fans, that doesn’t matter. Once our defense started to shake, it just snowballed from there. I just prayed that the first half would end quickly, but as I looked at the clock, time wasn’t running fast enough. It was first time I had that kind of experience.

After coach Hong resigned, you left a message in your Instagram page saying, “Yesterday was painful because I couldn’t do anything.” What did that mean?

The coach trusted me and gave me the opportunity to play, but I felt so sorry that I couldn’t meet his expectations. I wanted to call him, but I just had no courage to do it.

With this national team, you seem to serve as a bridge between rookies and veterans.

I have to try. But first, what’s important for me is to get a good evaluation from coach Stielike.

The match against Myanmar signals the road to the 2018 World Cup in Russia.

In the last regional qualifier for the Brazil World Cup, I couldn’t really play because of my injury and just played in the group stage. But for this World Cup, I want to stay with the team from beginning to end.

You had a difficult first season in Germany.

I had hard time adjusting to the new environment, but I also learned new things. I now think differently about finding solutions to my own problems. In order to make the most of opportunities, I learned your body has to be always fit, and so I focus more on that when I’m training.

People say you managed to fill the void of Callsen-Bracker perfectly.

Just two months ago, I was struggling mentally because of my injured foot, but it’s fortunate that I wrapped up the season well. The bones in my left feet weakened because I took too many painkillers during the World Cup. I returned to the pitch late last year, but had to rest four months again. Now I’m fully recovered. In the past, I feared kicking the ball with my left foot, but now, I’m just focused into the game.

Your club finished fifth and will compete in the Europa League next season.

It’s a miracle. We all have high hopes for next year even though we finished the season just last month (laughs).

Do you think you have positioned yourself well in Europe as a central defender?

I’m still working. If you can start 20 matches every season, then you can say that player has positioned himself well in the league. My first goal is not to get injured and the second is to become a regular starter.


Are you dreaming about playing with bigger clubs in the future?

I have to focus on what’s important for me right now ... The best team for me is one where I can play.