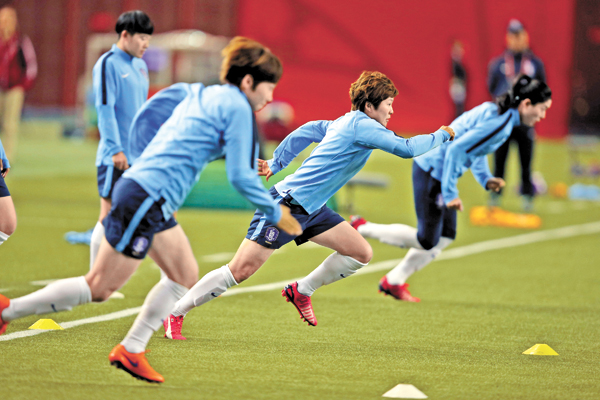 Taegeuk Ladies forward Ji So-yun, center, and other players train at Olympic Stadium in Montreal on Tuesday (Korean time) ahead of their first match at the 2015 FIFA World Cup against Brazil. Korea will face Brazil at 8 a.m. on Wednesday. Provided by the Korea Football Association

Korea starts the 2015 FIFA Women’s World Cup in Canada by facing Brazil in Montreal at 8 a.m. Wednesday (Korean time), with the Taegeuk Ladies hoping to collect their first victory in their second appearance at the top competition.

Ranked 18th in the world, Korea’s women are entering the World Cup for the first time since 2003. In its last appearance at the quadrennial event, Korea lost all three matches and failed to enter the Round of 16.

Korea is seen as the underdog against world No.7 Brazil, also the runner-up of the 2007 World Cup, but coach Yoon Duk-yeo said that the team won’t miss its chance for revenge.

In the 2003 World Cup, Korea’s first opponent was also Brazil, which beat the country 3-0. In overall head-to-heads, Brazil leads with two wins and one loss so far.

“It’s a big joy that Korean women’s football can play on this big stage,” said Yoon at the press conference on Tuesday.

“I believe many fans will give us a lot of support for our first World Cup appearance in 12 years, and we will do our best to deliver excitement for fans at home.”

The team knows that to perform well in its first match, it needs to contain Brazil’s attacking trio of Cristiane, Formiga and, in particular, five-time FIFA Women Player of the Year winner Marta.

The 29-year-old Marta, who is the tournament’s all-time leading scorer, along with retired German player Birgit Prinz, with 14 goals, also scored against Korea in the 2003 World Cup. She is now on her fourth World Cup.

“Marta scored a goal against us in 2003, which is probably a good memory for her,” said Korea team captain Cho So-hyun. “That’s why we really want to beat her.”

Before arriving in Canada, Korea held world No. 2 United States to a scoreless draw in a friendly held in New Jersey, showing off impressive defense. But Yoon said that in the Brazil match, Korea doesn’t plan to just hold its ground.

The 54-year-old coach, who has been leading the women’s team since late 2012, said players gained confidence after the match against the United States and believe they can compete against the best players in the world.

“In Brazil, all players are talented at scoring, not just Marta” he said. “But I believe we will also have good chances, and what’s critical is whether we can convert those chances [into goals].”

“Ji is a player who has the ability to score at any time,” he said.

Ji, 24, the all-time leading scorer in the Korean league with 38 goals in 74 matches, has already gained international fame by winning the Professional Footballers’ Association Women’s Player of the Year in England.

Coincidentally, Ji’s first match as a national team player was also against Brazil nine years ago in a friendly, which Korea lost 0-1. The Chelsea Ladies FC forward said her teammates shouldn’t be afraid just because of Marta’s reputation.

“Even though she’s Marta, she’s a player we don’t have to respect on the pitch,” Ji said. “It will be good if I score a goal, but I’d rather give an assist to my teammates. We will win the match against Brazil.”