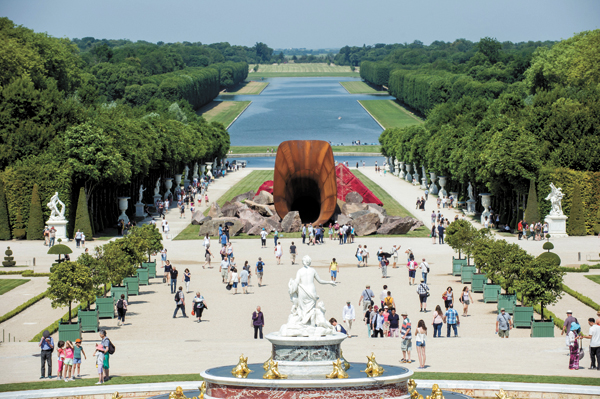 Visitors walk alongside “Dirty Corners” by Indian-British artist Anish Kapoor in the gardens of the Chateau de Versailles outside Paris on Friday. [AP/NEWSIS]

VERSAILLES, France - Is that new sculpture in the gardens of Versailles a massive tuba? Or is it supposed to represent Marie Antoinette’s private parts?

Artist Anish Kapoor is not saying exactly what the centerpiece of his latest installation, called “Dirty Corner,’’ represents.

He told the French newspaper Journal du dimanche that it suggests “the vagina of the queen who takes power’’ and called it a “provocation.’’

But he told journalists at the Chateau of Versailles on Friday that viewers can interpret it as they like.

“A work has multiple interpretive possibilities,’’ Kapoor said. “What I am doing here is kind of taking the surface of [renowned French landscape designer] Le Notre’s ordered garden and looking inside.’’

“Inevitably, one comes across the body, our bodies and a certain level of sexuality,’’ he said.

“But it is certainly not the only thing it is about.’’

The conservative Versailles mayor tweeted his disapproval, and some far-right bloggers expressed theirs, but viewers seemed largely unperturbed.

Brittany Watson, a 28-year-old visiting from Virginia, said, “I think it is appropriate. I mean, a human body is a work of art.’’

Versailles resident and retired professor Pierre Dhainaut took issue with the sculpture for other reasons.

“This is a bit of a mess, a heap of metal, rocks,’’ he said. “I know it is a composition, but let’s say that this is ruining the perspective that visitors of the castle may have,’’ he said.

Sexually controversial art is not rare both in and around Paris, but it occasionally prompts anger. An installation that some said resembled a giant sex toy was vandalized last year. AP