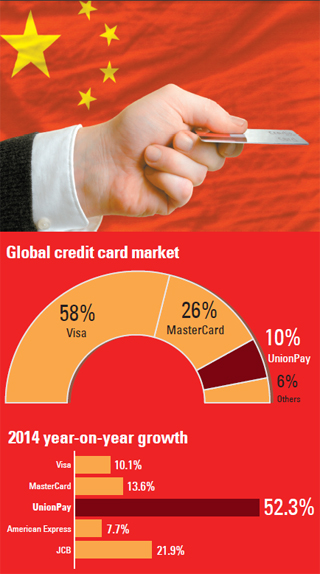 With China easing restrictions on the credit card processing business, Korean competitors hope to grab a share of a market in which more than 7,000 trillion won ($6.2 trillion) is spent annually using plastic.

On June 1, the Chinese government officially allowed foreign companies to launch their credit cards in the country for the first time since the Communist nation first issued plastic in 1985.

Under the monopoly, credit card transactions with UnionPay cards surpassed 41 trillion yuan ($6.6 trillion) in 2014, according to the Nilson Report. UnionPay’s 10 percent share of the global market was third behind Visa (58 percent) and MasterCard (26 percent). 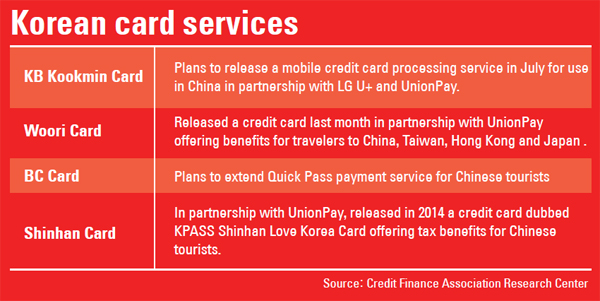 Beijing’s decision to open up its credit card market came after the World Trade Organization ruled in 2012 in favor of the United States in a lawsuit complaining that the restrictions were in violation of free trade rules.

Some Korean credit card companies are jumping at the chance to expand into China. KB Kookmin Card plans to issue the first credit card processing service for mobile phones in partnership with LG U+ and UnionPay. The so-called “mobile credit card” can be used in both Korea and China starting in July.

An employee of the company told the JoongAng Ilbo the company has about 10 branches in China, so it can utilize synergy among the them to promote its credit card business there.

Still, some analysts say it will not be easy for Korean competitors to gain a foothold in China.

“The requirements for foreign companies to operate a credit card payment system are quite strict,” said Park Se-yeong, an analyst at the Credit Finance Association Research Center.

For a foreign company to register a credit card business in China requires at least 1 billion yuan of initial capital. Board members and executives also must be approved by the Chinese government.

“Currently, the Chinese credit card market is occupied by UnionPay, with a 99 percent market share,” said Jeong Ha-neul, an analyst at eBest Investment Securities. “Other foreign companies such as MasterCard or Visa are expected to offer significant benefits for Chinese users, such as discounts on fees. In this sense, it is true there will be a hurdle for Korean players to expand their market share in China.”

One possible way for Korean companies to boost their business in China is to share the high costs of entering the market, explained Park.

“Considering the high entry barrier to the Chinese payment market,” he said, “it could be a solution for Korean companies to pay the cost necessary to enter the market together with other companies or financial institutions.”

The Korean government is considering whether to actively support the companies. One idea is to launch an electronic system to connect automatic teller machines in the two countries.

“If the two countries’ ATM networks were connected, it would enable Korean travelers to use their Korean credit cards to withdraw cash at a machine in China and vice versa,” said an official of the Bank of Korea. “We are just now considering those ideas.”