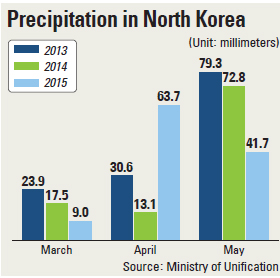 North Korea could face a reduction in its food production of up to 20 percent this year if a severe drought continues into early July, South Korea’s Ministry of Unification said Tuesday.

In May, the North had only 56.7 percent of the average rainfall for May using figures from 1981 to 2010, a ministry official said.

“North Korea needs 6 million tons of food production annually to feed its people. If it suffers a 20 percent decrease in production, it will produce an estimated 4.3 and 4.4 million tons,” said the official, speaking on condition of anonymity.

The official added that the drought in the North this year is a continuation of its hardships from the unfavorable weather conditions last year during which its yearly rainfall stood at 61 percent of the average rainfall, using figures from 1981 to 2010. The official said the North’s average rainfall rate last year was its lowest in 15 years.

Hwanghae and Pyongan provinces, the Communist country’s breadbaskets, have particularly suffered, with precipitation between 46.9 percent and 61 percent of the average for May.

The official said the Communist regime was expected to advise farmers to replace rice with corn if the drought continues into the next week, as corn can survive in drier weather. News reports published over the past few weeks in the state-run daily Rodong Sinmun told of authorities’ orders to substitute rice with corn at drought-stricken farms.

Citing an unnamed source, the Ministry of Unification, which is in charge of inter-Korean relations, noted that a dam in Hamhung, South Hamgyong Province that has a water level of 12 to 15 meters (39 to 49 feet) in normal times was down to 30 centimeters due to the lack of rainfall.

The government official said it was unlikely that people will starve as they did in the great famine 20 years ago because “people have learned how to make ends meet over the last two decades.”

To overcome a food shortfall, the North could reduce the amount of food supplied to its one-million-man military or increase imports of crops. The Seoul government, however, does not know whether food for the military will be cut, the official said.

When the North went through what is known as the “Arduous March” in the mid-1990s, as many as three million people were estimated to have perished from acute food shortage. Since then, a black market has sprung up, bringing flexibility to food distribution. North Korean experts agree the famine in the 1990s took a heavy toll because North Koreans relied on state-issued food rations with no other means to feed themselves.