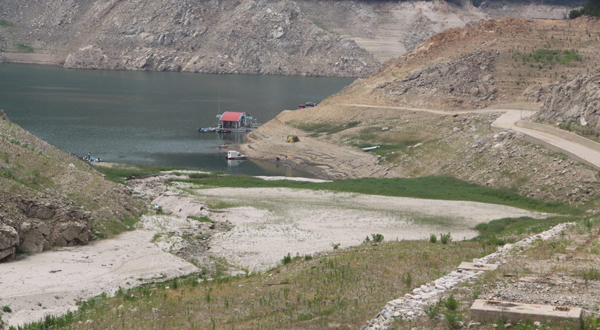 An ongoing drought has caused waters in Soyang Lake in Chuncheon, Gangwon, to recede. And due to its severity, the water level in the Soyang Dam in Chuncheon, Gangwon, fell to 154.12 meters (505.64 feet), just 2 meters shy of its record low of 151.93 meters on June 2, 1978. In 10 days, the water level is estimated to fall to 150 meters, which means the dam will no longer be able to provide water for agriculture or other uses. [NEWSIS]

“Because it’s dried to its roots, it has no commercial value,” Im said, holding in his hand the garlic bulb, which normally grows to half the size of a fist, but in this case was the size of a golf ball.

Im and his crops have suffered from the prolonged drought affecting areas throughout central Korea. The total amount of precipitation for this year in Danyang County alone currently stands at just 198.9 millimeters (7.8 inches), 25 percent below average.

In Ganghwa County in Incheon, rice paddies that should be flooded with water are completely parched, and rice seedlings in the fields have long since yellowed. In some places, the ground is beginning to crack. 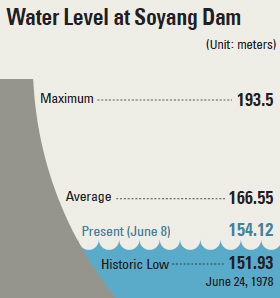 Though it received 1,167 millimeters in annual precipitation in 2013, Gangwha County last year saw almost 50 percent less rain, amounting to just 554 millimeters for 2014. This year, rainfall has decreased by another 30 percent.

The county’s 31 reservoirs are already on their way to running completely dry and have fallen to 7.5 percent of their average storage capacity.

According to one county official, reservoir levels must be at 50 percent capacity for farmers to do their work properly.

This year, areas like Gangwha County, Gyeonggi; Gangwon and North Chungcheong have only received 60 to 70 percent of the average amount of annual precipitation they normally see in other years. But after making it through the winter drought, it seems as though the rainfall anticipated in the spring has stopped.

It is farmers who have been hit hardest by the drought. Daeseong-dong in Paju, Gyeonggi, the only settlement within the demilitarized zone (DMZ), is so short on water that only 740,000 square meters (885,032.63 square yards), or 20 percent, of its 3.7 million square meters of paddy fields, have been planted with rice.

“I drive my truck into the fields 12 times a day to deliver water,” said Kim Duk-jin, 48, who cultivates lettuce and cabbage in Pyeongchang, Gangwon.

“We’ve temporarily created a spring by almost draining the nearby river of water and are using that for agriculture, but it’s hardly enough,” added Kim Heon-yong, the leader of the agricultural policy team for Jaecheon, North Chungcheong.

In Gangwha County, the Incheon Fire and Safety Management Department has operated an emergency agricultural water supply support group since April as a preventive measure against the drought.

With the help of local teenagers, the fire department supplies water to those in need with an exclusive water wagon, a fire truck equipped to deliver it.

Similarly, the Soyang Dam in Chuncheon, Gangwon, and the Chungju Dam in Chungju, North Chungcheong, both of which channel water into the Han River, are dangerously close to reaching their lowest water levels in history.

This means that if dry weather conditions continue for another week, the dam’s water level will drop to a new all-time low.

“If it doesn’t rain in the next 10 days, we will run into problems with the supply of potable water in Seoul,” said an official at K-Water, the state-supported Korea Water Resources Corporation.

Yet the forecast for the coming days remains dry, and the monsoons that typically grace the peninsula beginning in late June are anticipated to arrive later this year.

“It’s predicted that rain will not come until July, when the North Pacific high-pressure system expands its influence and the low-pressure system passes through to the middle region [of the Korean peninsula],” said Kim Yong-beom, a weather forecaster for the Korea Meteorological Administration.