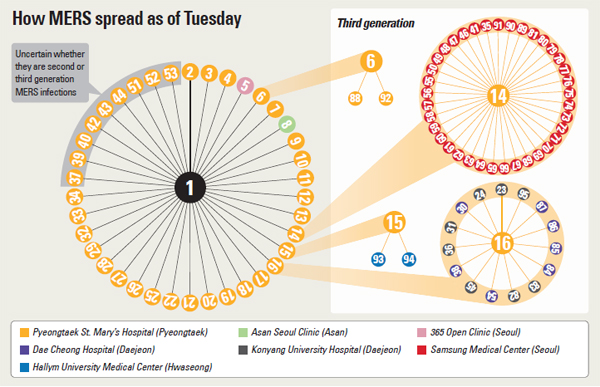 A major worry about the Middle East respiratory syndrome (MERS) outbreak is coming true: The disease is spreading to other regions as people who visited Samsung Medical Center move from Seoul not knowing that they’re infected.

Samsung, one of Korea’s biggest and best hospitals, accepts patients from every corner of the country. The Ministry of Health and Welfare is worrying about possible fourth-generation infections, although none have been reported. 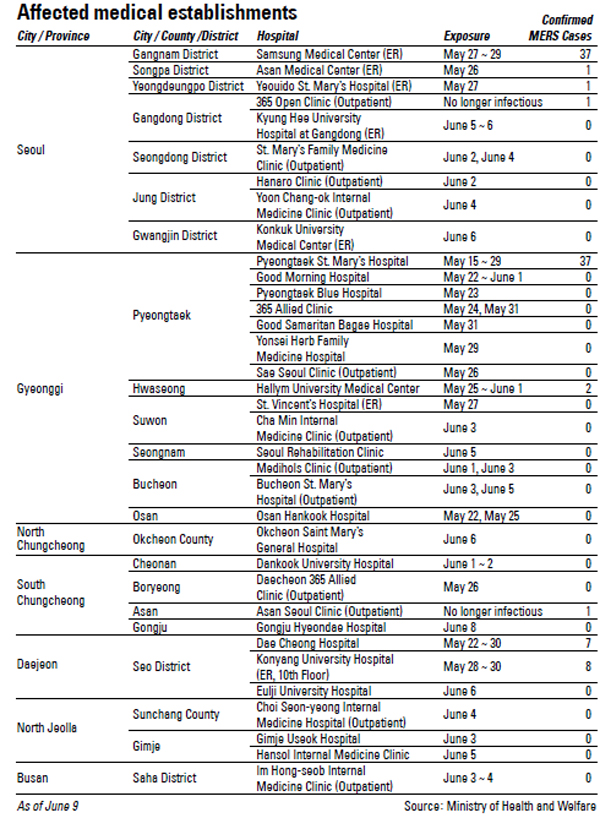 Of the total, 37 caught the disease at Samsung Medical Center, and some of them were found to have visited other large hospitals before they were confirmed with MERS.

Samsung is where Patient No. 1, who traveled to Middle East for business and returned on May 4, was correctly diagnosed with MERS on May 20. It is also where Patient No. 14, who contracted the disease from Patient No. 1 at Pyeongtaek St. Mary’s Hospital between May 15 and 17, was treated for three days from May 27 to 29.

Those who contracted the disease from Patient No. 14 are believed to have contracted MERS in the emergency room.

Some of Tuesday’s nine new MERS cases included those who contracted the disease at Samsung and were confirmed to have the disease outside of Seoul.

The health authorities aren’t able to track down every single potential patient who visited Samsung hospital’s emergency room during the period of most danger. And some potential patients are not admitting they were in Samsung Medical Center when they go to another hospital with health problems.

“A patient who was treated in our emergency room was confirmed for MERS last night and he is in critical condition,” said Director Hwang In-taek of Eulji University Hospital in Daejeon on Tuesday. “We’ve found that he was treated for liver cancer, diabetes and chronic lung disease at Samsung Medical Center.”

According to the university hospital, he began to show symptoms from June 3 but did not report them to the Health Ministry. Instead, he went to a local hospital in Okcheon County, North Chungcheong. As his condition got worse, he visited another hospital in the same county and was subsequently taken to Eulji University Hospital, where he tested positive for MERS.

Patient No. 89 was also treated for fever on June 3 at a local hospital in Gimje, North Jeolla, but he was not put in quarantine coverage because he didn’t admit to having visited a patient at Samsung hospital earlier. When he felt sick, he visited three hospitals in Gimje, including one that he stayed in for two days, before he was diagnosed with MERS.

Health authorities in North Jeolla have found that Patient No. 89 had contact with about 367 people while he was off the government’s radar.

Patient No. 94, who contracted the disease from Patient No. 15 at Hallym University Medical Center in Hwaseong, Gyeonggi, on May 27 or 28, was found to have stayed at a hospital for the elderly, who are considered particularly vulnerable to MERS.

If any of those who were infected at Samsung Medical Center transmit the disease to other people, they will become the country’s fourth-generation patients. The health authority said MERS’ latent period is two to 14 days, with 6.5 days on average.

Three of the nine new cases on Tuesday were infected at Samsung Medical Center by Patient No. 14, down from 17 on Monday.

“We expect the [MERS] spread will take a downturn if there aren’t further infections,” said an official of the Health Ministry.

“We will give 100 percent information from now on,” Choi said. “We can’t reveal patients’ names, but we will give their medical status to prevent fear among people.”

Choi’s announcement came after the government also announced stronger efforts for MERS prevention and disclosed financial support for patients. According to the Health Ministry, all MERS patients confirmed after May 20 are not obliged to pay anything for treatment.

Also, the government launched a location tracking system in cooperation with the country’s mobile carriers from Monday, which is expected to help the health authority figure out whether potential patients are having contact with other people.

Seoul Mayor Park Won-soon, the politician who has impressed the public with sterner measures to fight the disease in the capital, also promised more spending on the prevention effort Tuesday.

“When it reaches a critical point, it is either impossible or much more costly to reverse,” said Park at a meeting of the Seoul Metropolitan Government’s countermeasure headquarters. “We need to do our best, and we need to put all effort and manpower into this before we face a catastrophe.”