Reactions to disease vary in the level of caution

Reactions to disease vary in the level of caution 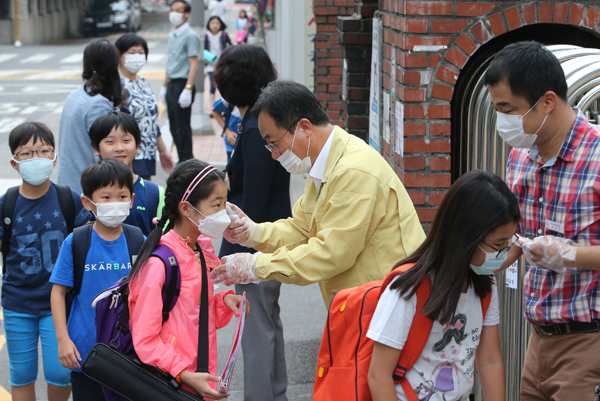 Teachers check students’ body temperatures on Tuesday morning at the main gate of Suan Elementary School in Busan to potentially detect students who may have contracted MERS. By Song Bong-geun

A working mom with two boys, Kang Hyeon-jeong has had enough of the panic surrounding the outbreak of Middle East respiratory disease (MERS) in Korea.

The potentially fatal disease, which has resulted in seven deaths so far, prompted many schools and academies in the capital area to cancel classes, including those her sons attend.

And caring for two energetic boys in the interim has worn her out.

“I’m stuck with holding back two kids who are eager to play outside,” said the 39-year-old, who lives in Yongin, Gyeonggi. “All day long, I have to entertain them in our tiny house and keep them away from playing on the computer. They’re irritated with me, and as a mother, I’m starting to feel my limits, too.”

Koreans nationwide have responded to the recent MERS outbreak with varying levels of caution, but with the disease appearing far from diminished, people are now worried that it might take a toll on their daily lives longer than previously thought.

“I’m getting married at a place just 200 meters (656 feet) away from Gangnam Community Health Center,” in southern Seoul, said a bride-to-be surnamed Gu. The wedding is slated for Saturday, but the 27-year-old said she is afraid her guests might not show up over fears regarding contagions.

“I got a call from the wedding hall a couple of days ago, asking whether I wanted to downsize my expected number of guests,” she said. “I’m terrified ahead of the big day.”

Nam Hyeong-geun, a pediatrician in Seongnam, Gyeonggi, added that a couple recently dropped by his office to pick up prescriptions for their sick child who they left at home, afraid he could potentially contract MERS if taken to a medical facility.

“Strictly speaking, it’s illegal to write prescriptions without personally seeing a patient,” said Nam. “But I’ve diagnosed him with a cold before, and the folks looked too nerve-wracked for me to dismiss them.”

With mass outdoor gatherings now being banned across the country, police officers in the capital say they have also received fewer calls lately.

Similarly, officers in Hwagok-dong in Gangseo District, western Seoul, said they were dispatched to the scene about 30 percent less.

Last week, empty ball parks and football stadiums brought local sports authorities together in Jongno District, central Seoul, where they discussed how the country’s most popular sporting events should respond to the staggering drop in crowds.

On Sunday, five Korea Baseball Organization (KBO) games saw just 43,468 viewers total - or about 8,694 each - a 33.6 percent drop in the average number of people a normal season game usually attracts on Sundays.

In the K-League Classic, the nation’s top professional football league, the six games held over the weekend drew 5,350 people on average. That was approximately 40 percent less than the number of spectators that usually stay until the game’s 14th round.

After a meeting with football, men’s basketball, women’s basketball and volleyball officials, Han Oung-soo, the director of the K-League, said they had decided not to suspend the games, fearing it would cause even more social disorder.

Heeding the country’s four-tiered crisis system, Han said he and his colleagues would come up with ways to respond to MERS if a level 3 or 4 alert were issued.

The country is currently on level 2, with level 4 being the most serious.

Local college students, in the meantime, have responded to the MERS outbreak by refusing to visit the library.

Seats were left empty at Sungkyunkwan University’s central library in Jongno District, central Seoul, when reporters from the JoongAng Ilbo visited on Tuesday afternoon. The two-week final exams period began last week, but Kim Hee-beom, who works at the library’s information support department, said students were not flooding in as usual.

With more than 300 schools in Seoul having canceled classes, some students have opted to kill their time at PC rooms, also known as Internet cafes.

The Seoul Metropolitan Office of Education said Tuesday it will issue a warning to the Seoul city government and the Internet PC Culture Association to advise Internet cafes to provide hand sanitizer and regularly ventilate their facilities.