On the wrong side of records, pitchers persevere

On the wrong side of records, pitchers persevere 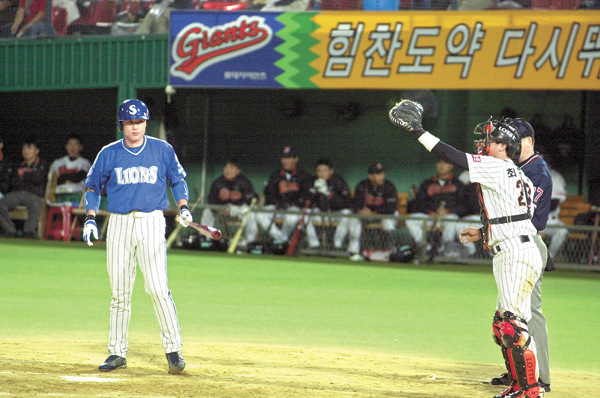 Lee Seung-yuop of the Samsung Lions is intentionally walked by the Lotte Giants on Sept. 27, 2003. Angry fans threw trash on the field.[JoongAng Ilbo]

In a game between the Samsung Lions and Lotte Giants on June 3, Lions slugger Lee Seung-yuop delivered his historic 400th home run in the third inning.

While fans’ attention was focused on the 38-year-old Lee, there was another player whose name will go down in Korea Baseball Organization (KBO) history: Giants pitcher Koo Seung-min.

Koo, who turns 25 Friday, was making his fourth start in the KBO League.

Although he will be remembered as the pitcher who gave up Lee’s 400th home run, the baseball community also praised the right-hander’s courage in challenging the slugger. 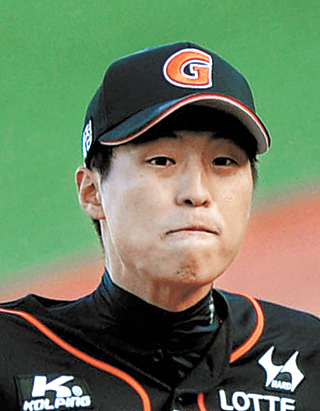 “He didn’t pitch around me,” said Lee.

It was an especially gutsy decision for Koo because he already had allowed five runs in the first inning. When facing Lee, Giants catcher Kang Ming-ho called for an inside pitch, but the ball was in the center of the strike zone and then it was in the outfield seats.

Koo said that when he returned to the dugout at end of the third inning he had a “feeling that isn’t inexpressible.”

However, Koo now sees the experience as a positive.

“Instead of being disappointed by giving up the 400th home run, I want to remember that I faced Lee Seung-yuop and Lions batters who had won four straight championships,” he said. “I know I still have to work hard and I believe this experience will serve as a springboard for me to grow. I want to be a good pitcher and will remember this moment.”

Giants pitcher Lee Jung-min, who tried to cheer up Koo in the dugout, had a similar experience against Lee Seung-yuop on Oct. 2, 2003, when he allowed the home run that set a single season Asian record.

The 36-year-old right-hander was in his second year in the league when he surrendered the 56th home run to the Lions slugger in the second inning, the first time he faced Lee Seung-yuop.

He also remembers that game because he picked up his first win in the KBO.

But there is yet another pitcher who has had a more difficult time mentally, even though Lee Seung-youp didn’t get a hit off him.

Ka Deuk-yeom, now Doosan Bears pitching coach, never allowed a record-breaking home run to Lee, but he still remembers facing the slugger on Sept. 27, 2003, when he was playing for the Giants.

With the Giants trailing 4-2 in the top of the eighth inning and Lee at the plate at Sajik Baseball Stadium in Busan, catcher Choi Ki-moon stood and called for an intentional walk.

Angry fans halted the game by throwing trash on the field, and it took more than a hour for play to resume.

“Although I was ordered by the dugout to intentionally walk Lee, I still regret it,” the 45-year-old Ka said later. “At that game, my two daughters were at the stadium and it was heartbreaking for me to be the father who didn’t face the batter.”

Pitchers are always in danger of being in the record books for the wrong reason, yet sometimes they are praised for their courage.

Kim Won-hyong, now pitching coach for the SK Wyverns, is remembered for giving up the 300th home run to Lee Seung-yuop on June 20, 2003, when Lee became the youngest to do so at the age of 26 years, 10 months and four days.

Three years later, Kim, 42, also gave up the 300th home run to Yang Jun-hyuk of the Lions, who is second on the career home run list behind Lee.

Yet the right-hander later said he never thought about avoiding these batters, even if they were just one swing away from the record books.

Last year, Wyverns pitcher Chei Byung-yong was applauded after facing Seo Gun-chang of the Nexen Heroes, who was closing in on becoming the first KBO player to have 200 hits in a season.

On Oct. 17 during the final game of the year, the 33-year-old Chei gave up a double to Seo, who later won the MVP award, in the first inning.

The 25-year-old batter later commended Chei for pitching to him.

Korea’s legendary Park Chan-ho also is remembered as a pitcher who challenged batters on the verge of great achievements.

When the right-hander was pitching for the Los Angeles Dodgers on Oct. 5, 2001, against the San Francisco Giants, Barry Bonds of the Giants had just tied Mark McGwire’s Major League Baseball single season home run record of 70. It hadn’t been easy for Bonds to tie McGwire because he had walked 12 times in 19 at bats after hitting his 69th.

However, Park didn’t hesitate to throw strikes. But at the end of the day, Park allowed Bonds to hit not only his record-breaking 71st, but No. 72 as well.

Giants manager Dusty Baker after the game paid his respect to Park and Dodgers manager Jim Tracy, saying, “They pitched to him.”

Earlier that year, Park gave up another noteworthy home run to Cal Ripken Jr., who was playing in his final All-Star Game. The Hall of Fame Baltimore Orioles shortstop was voted All-Star MVP.