Women come up short vs. Brazil

Women come up short vs. Brazil 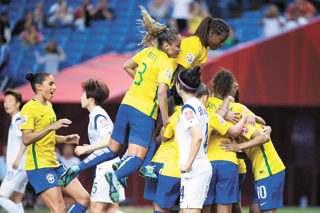 Brazilian players celebrate after Marta scored on a penalty kick against Korea during the second half of their FIFA Women’s World Cup Group E match on Tuesday (local time) in Montreal. Brazil won, 2-0.[AP/NEWSIS]

Korea failed to get its first FIFA Women’s World Cup victory ever, losing 2-2 to Brazil in the Group E opener.

At Olympic Stadium in Montreal on Wednesday (Korean time), the Taegeuk Ladies, making their first World Cup appearance in 12 years, fell to world No. 7 Brazil with two critical back pass misses that allowed Formiga and Marta to score. The team led by Yoon Duk-yeo is last in Group E, after Costa Rica and Spain played to a 1-1 draw.

This was Korea’s first encounter with Brazil since the 2003 FIFA World Cup, when the team lost 3-0. Trying to seek revenge and looking for its first Cup victory, Korea, ranked 18th in the world, started the match with tight defensive pressure from the front line to contain talented Brazilian forwards Marta, Andressa Alves and Cristiane.

Brazil, the 2007 World Cup runner-up, set the tone early, as right back Fabiana’s shot hit the cross bar from mid-range in the third minute. Korea could have been on the board first just two minutes later when striker Yoo Young-A fell inside the penalty box after contact with Fabiana, but the referee didn’t call a foul. 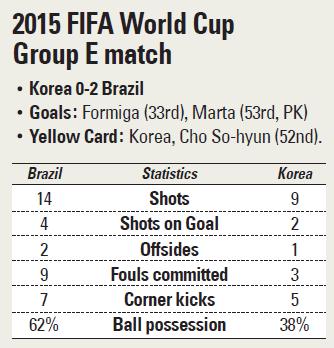 While holding firmly with the back four of Kim Hye-ri, Kim Do-yeon, Shim Seo-yeon and Lee Eun-mi, Korea surrendered the first goal to veteran Brazilian midfielder Formiga, who intercepted Kim Do-yeon’s back pass to goalkeeper Kim Jung-mi and found the net in the 33rd minute.

With the goal, the 37-year-old Formiga, who is playing in her sixth World Cup, became oldest player to score in tournament history.

The 162-centimeter (5-foot-3) Brazilian was involved in the second goal eight minutes into the second half.

After stealing a back pass from Ji So-yun, the Korean ace who barely touched the ball in the first half, Formiga rushed into the penalty area before being felled by Korea captain Cho So-hyun, who received a yellow card.

The penalty was converted by Marta, which made the five-time FIFA Women’s World Player of the Year the all-time leading World Cup scorer with 15, surpassing the 14 goals scored by retired German forward Brigit Prinz.

Desperate to chase the South American team, Jung Seol-bin replaced Yoo in the 67th minute and Lee So-dam went in for Kwon Ha-nul in the 77th.

Probably Korea’s best chance came from Jeon Ga-eul after Ji feed her with good passes in the 70th and 79th minutes, but her first shot was deflected by Fabiana, while her second sailed over the net.

“We gave it our best shot and we’re disappointed with the defeat, but Brazil played very well,” said coach Yoon. “My players did well from a physical point of view, but we made mistakes and conceded two goals.”

Korea’s next opponent is Costa Rica, which is ranked 37th in the world, at 8 a.m. Sunday (Korean time) in Montreal. Yoon said the team will regroup and go for the country’s first win in the quadrennial event.

“There are various aspects that we need to improve on, but I’m mostly concerned by the damage that the defeat might have done to our morale - we’ll need to recover quickly so that we can meet the challenges ahead,” he said.