Artist, craftsmen from North collaborate on body of work

Artist, craftsmen from North collaborate on body of work 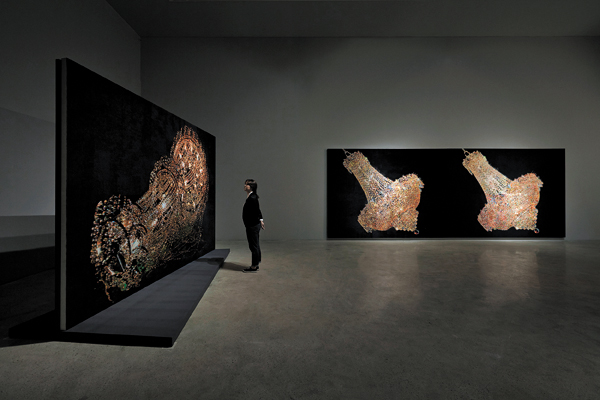 A gallery worker looks at one of five embroidered pieces titled “What You See is the Unseen / Chandeliers for Five Cities,” now on display at Kukje Gallery in central Seoul. The works were created by artist Kyungah Ham in collaboration with North Korean craftsmen. Provided by the gallery

“Chandeliers for Five Cities,” a series of grand artworks reminiscent of paintings that depict splendid, tilted light displays, has a relatively self-explanatory name.

But the alternative title - “What You See is the Unseen” - of the art currently on display at Kukje Gallery’s K3 Space, sounds far more enigmatic.

The riddle over the title, however, is solved when you hear how artist Kyungah Ham created the series.

The embroidered pieces are the results of the South Korean artist’s secret collaboration with North Korean craftsmen.

A close up of one of the chandeliers depicted by the artist shows the stitches in the work. They represent the hidden personalities of the anonymous North Korean embroiderers who participated in Ham’s project. The artist said she created the work because she was inspired by the face of a young boy performing in a North Korean mass game that she saw on TV.

For the project, Ham, 49, created digital images of grandiose chandeliers and abstract paintings on a computer and printed them on paper or fabric. She sent them via middlemen in China to North Korean embroiderers well known for their excellent skills. After recreating the digital images by hand, stitch by stitch, the North Koreans sent them back to the South Korean artist via the same go betweens.

“It takes months of time for each of the works ... longer than one year in many cases and requires great patience,” the artist said. “Sometimes, the images I send are just gone forever, due to Pyongyang’s censorship or for some unknown reasons. Sometimes they return as embroidery of very different colors from what I intended.

She added that it is these elements that turn the pieces into art. Accordingly, she adds the phrases “middle man, anxiety and censorship,” as well as “North Korean hand embroidery, silk threads on cotton” on the labels of her work.

The images that were lost or returned with results differing from the original plans represent the limits of communication between the two Koreas, which are distant from each other politically, economically and culturally. On the other hand, the artist says the stitches that form the chandeliers, which reflect “the desires of the super powers related with the division of the Korean peninsula,” represent the hidden personalities of the anonymous North Korean craftsmen.

“I was inspired by a North Korean mass game I happened to see on TV,” Ham said. “The numerous performers were using hand-held cards to illustrate the giant image of a pistol. When it zoomed in, for a brief moment, a young boy peeked his head out from behind the card. The boy looked like a pixel of an image but also a person. The scene was unforgettable.”

Some text, most of which are lyrics from South Korean pop songs, are mixed in with the complicated color fields of the embroidered images at K2 Space.

“The North Korean craftsmen couldn’t help reading the texts while making the embroideries,” the artist said. “They can have various meanings to them in different contexts.”

“One of the attributes of the embroidery is that it can hide and reveal bits of information, thereby functioning like a coded language,” said Zoe Chun, director of Kukje Gallery.