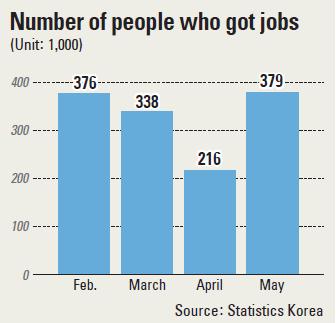 Last month, the number of people with jobs increased by 379,000 compared to a year ago, putting the total number of employed at 26.2 million, Statistics Korea reported Wednesday.

It was the largest employment increase in five months and the highest number of people between the ages of 15 and 64 working since data was first compiled in 1982.

According to Statistics Korea on Wednesday, the employment rate in May was 66.1 percent, up 0.5 percentage point from a year ago.

“The overall population has shrunk by roughly 8,000, but employment of youth [aged 15 to 29] has risen 1.2 percentage points from a year ago,” said a Statistics Korea official.

In May, the employment rate for that age group was 41.7 percent. The number of people in that age group who got jobs in May was 114,000 more than in the same month last year.

The biggest number of hires came from the lodging and restaurant industry, which added 143,000 in May, a 7 percent year-on-year increase. Close behind was manufacturing with 140,000 new hires, up 3.2 percent. The health and welfare sector added 80,000 new workers, up 4.7 percent year-on-year.

The financial and insurance industry had 46,000 fewer employees, down 5.5 percent.