Many married women in the workforce feel pressure to pass up maternity leave, worrying that their company would penalize them for it, a survey by a job portal showed.

According to a JobKorea survey of 734 women who are married and employed, but may or may not already have children, 41 percent said they might not take leave due to worries about how it would affect their career.

Nearly 25 percent said taking maternity leave was equivalent to submitting their resignation, and 8 percent said they would be actually be penalized by their company if they left.

Korea’s current maternity protection act gives every mother the right to take 90 days of paid leave, as well as an additional year of paid or unpaid leave to care for their child. 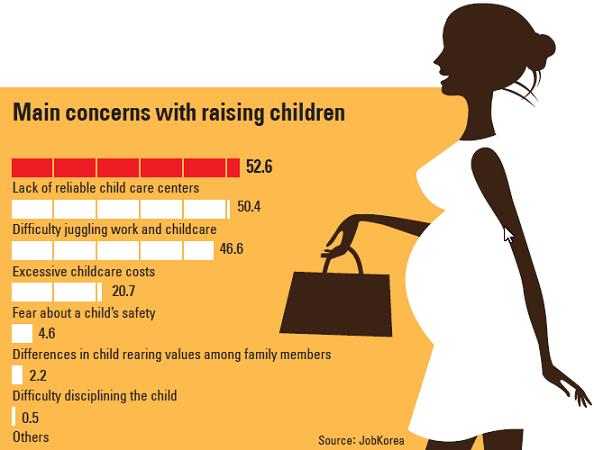 Workers at big corporations are often entitled to a leave, and a lucky few may even take a longer break to care for their children.

But many working mothers outside of big-name firms are not so fortunate; taking maternity leave requires courage, and in some cases, even costs them their career.

Combined with a lack of reliable child care facilities, this often results in mothers leaving the workforce after giving birth.

According to Korea Statistical Information Service data, the employment rate for women ages 25 to 29 was 67.6 percent as of this May, but the figure fell to 56.6 percent for women between 30 to 39.

According to the survey, many working mothers are particularly worried about a lack of reliable childcare (52.6 percent, multiple answers allowed). Other concerns included balancing work and child rearing (50.4 percent) and the high cost of child care (46.6 percent).

Respondents most frequently cited flexible working hours as a factor that would help them juggle both work and raising a child (54.5 percent), followed by a worry-free leave of absence (49.2 percent) and a company-run childcare facility (41.7 percent).

“For me, the biggest issue is whether I can find a reliable caretaker for my children,” said a 36-year-old mother who took a leave of absence following the birth of her second child earlier this year.

“I am still mulling whether I should return to work or not. Being able to continue my career hinges on finding a good nanny. Sometimes I wish I were a man so I would not have to worry about these things,” she added.

Meanwhile, a separate survey of 367 working women who were married but did not have children showed that the majority, or 66 percent, planned to continue working after having a child.

The same respondents said that conditions for having a child included a reliable person to help with childcare (54.2 percent, multiple answers allowed), being financially stable (53.1 percent) and improvements in welfare policies related to child care (40.1 percent).