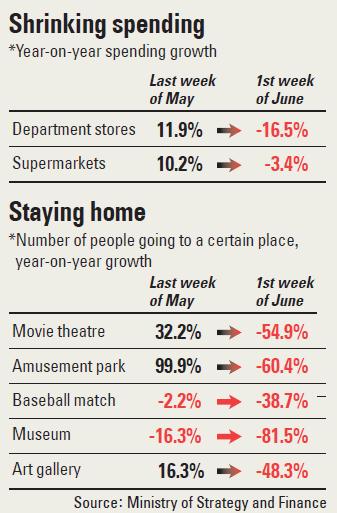 Finance Minister Choi Kyung-hwan announced a 400 billion won ($360 million) aid package for industries hurt by the outbreak of Middle East respiratory syndrome (MERS), as the economic impact of the spread of the virus grows.

The measures came as Hong Kong officially warned its residents not to travel to Korea except on essential business and stats show Koreans were increasingly reluctant to go shopping or spend on outdoor activities, a blow to many domestic businesses.

Statistics from the first week of June showed that Koreans are avoiding museums, movie theaters, amusement parks and even baseball games.

At a cabinet meeting to discuss measures to respond to the outbreak, Choi, who is also deputy prime minister for the economy and acting prime minister, pledged to support small- and medium-sized enterprises (SMEs) in industries heavily affected by the virus such as tourism, accommodations, and art performance sectors.

“We will provide financial and taxation supports for SMEs in industries directly affected [by the virus] due to cancellations of their contracts,” Choi said at a video conference meeting with officials in Seoul. “Particularly for people running small businesses on their own, the government will take a nationwide survey of their situations and provide funding or guarantees [for loans].”

The government will also offer subsidies for anyone ordered to quarantine themselves as suspected cases, Choi said. Day care services for working moms will be offered after some elementary schools closed.

Fear of the virus could lead to an overall slump in domestic consumption, Choi said.

“If public anxiety spreads or continues over the long term, it will worsen the economic situation of people, particularly those running their own businesses,” Choi said. “The government will try to prevent excessive public anxiety from spreading by providing exact information [on the current situation].”

“The MERS virus is not airborne,” he said. “Please don’t perpetuate misunderstandings. Continue your daily lives as usual … such as trips over the weekend or other daily economic activities.”

Fear of the virus has already taken its toll, a report by the Finance Ministry showed.

According to the report, spending at local department stores plummeted 16.5 percent in the first week of June year-on-year and 25 percent from a month earlier, the report said.

Local supermarkets reported a decline in sales of 3.4 percent year-on-year, and 7.2 percent from a month earlier.

Koreans spent less on their credit or debit cards, down by 5.5 percent from the first week of May.

But online shopping, which runs no risk of disease infection, increased 3.2 percent from a month earlier.

The number of people who went to movie theatres in the first week of June dropped 54.9 percent year-on-year, while that of visitors to local amusement parks fell 60.4 percent. The total audience for baseball matches in the first week of June sank 38.7 percent. Museums also saw fewer visitors, by 81.5 percent, as well as art galleries, by 48.3 percent.

The government’s 400 billion won of assistance is focused on supporting SMEs in affected industries through low-interest loans, guarantees for companies’ current loans, or extending the due date for repayments of loans or tax payments.

For SMEs in tourism, about 40 billion won of a special budget has been allocated to offer loans at a 1.5 percent annual lending rate.

Any SMEs struggling to maintain their business can apply for emergency government subsidies totaling 25 billion won.

The companies have to prove their sales dropped more than 20 percent due to MERS and that they did not lay off any employees.

Local banks will be ordered to offer low-interest loans up to 100 billion won in total, 300 million won for each company, and cut the current lending rates for struggling companies’ loans by 1 percentage point.

Additionally, the government will extend the ratio of loans guaranteed by the government-run guarantee fund from the current 85 percent to 95 percent for suffering companies and businesspeople.

For owners running small restaurants, cafes or accommodation facilities, the government will cut the lending rates on their loans to 2.6 percent annually and offer about 100 billion won of special subsidies.

Detailed requirements for the subsidies will be announced on June 22.