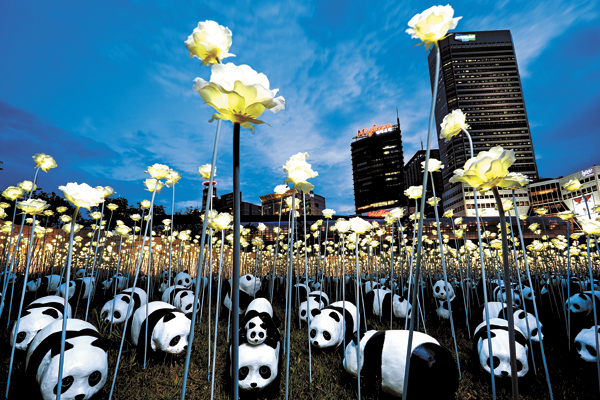 One afternoon last month, passersby were pleasantly surprised to see some 1,600 papier-mache pandas crawling across Seoul Plaza in front of City Hall.

The flash mob only lasted a few hours, but it was enough to create a buzz online, leading people to wonder how and why these adorable figures landed in Korea.

Soon, viewers knew that this batch of black-and-white bears made of recycled materials represented the Giant Panda, one of the most endangered animals in the world and a Chinese national treasure.

The public art project “1600 Pandas +” by French artist Paulo Grangeon in collaboration with the World Wide Fund For Nature (WWF) was created to raise awareness about endangered animals and sustainable growth.

Since launching in 2008 in Paris, the project has toured around the world to countries such as Italy, the Netherlands, Taiwan and Hong Kong to convey an eco-friendly message and provide joy.

Public projects such as “1600 Pandas +” are an effective way to share art with the general public, especially when they are well crafted and are for a good cause.

But since this type of installation is staged in a public domain, it requires a lot of preparation to successfully present and manage.

This is where Lotte Group, one of the nation’s top five conglomerates, came in. The company played a vital role in the black-and-white bears’ visit to Korea.

As host of “1600 Pandas +”, which will run until the end of July, two of the group’s affiliates, Lotte Department Store and Lotte World Mall, joined forces to introduce the project here.


Art is not for the privileged

As one of the country’s largest conglomerates, often referred to as chaebol here, Lotte Group has participated in diverse cultural sponsorship programs such as running galleries in 11 of its department store branches and hosting other similar events. 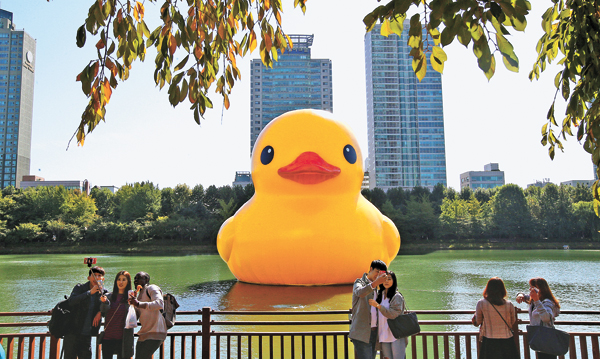 However, sponsoring public art projects, is arguably what the group has been showing a thorough effort in recently.

“We look for cultural content that is not confined to the selected few,” said Lee Jin-hyo, a PR manager at the Lotte Department Store.

“Instead, we look for that which we can share with a wider range of the general public. In that sense, we thought that a public art project was an attractive means of interacting and sharing a message with the people,” he added.

This is why Lotte World Mall brought the traveling yellow Rubber Duck installation to Seokchon Lake in southeastern Seoul last year, instantly captivating the minds of the people.

Reviving the childhood bathtub toy as a gigantic sculpture, the inflatable duck made by Dutch artist Florentijn Hofman was created to bring joy and happiness from the audience. 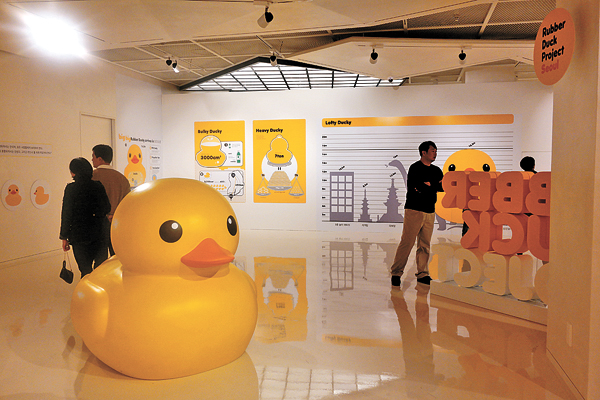 An exhibition related to the Rubber Duck was held simultaneously at Lotte Department Store’s Jamsil branch.

And although there were some obstacles along the way, such as the duck deflating due to mechanical errors, the project finished successfully.

There were also frequent visitors to the sideline exhibitions prepared at the nearby department store, which enabled people to get a glimpse into Hofman’s mind and how the duck has developed throughout the years in other countries.

The project also went viral via social media as people posted photos of the rubber duck from every angle possible through day and night.

There was criticism the company was trying to avert people’s eyes from concerns and unease the public had about the safety of its mega-budget Lotte World Mall construction project, which was soon to open in Jamsil, southeastern Seoul.

But despite such concerns, the Rubber Duck Project pulled off its original intention - bringing happiness to people and creating a bond among those who experienced it. 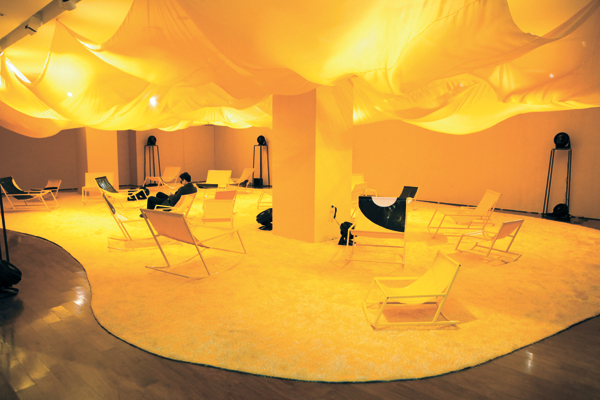 Recently, the yellow polyvinyl used to make the giant installation was upcycled into chairs and other products at the store. Provided by the department store

After the display ended, instead of discarding the polyvinyl material the duck was made from, the department store joined forces with artist group Fabrikr to upcycle it and produce products such as rocking chairs.

“We are trying to introduce artwork that breaks down the barriers to art,” said Kwon Yoon-kyung, the curator of the department store’s marketing team.

“In that sense, we are introducing contents that a family can enjoy together, instead of those that contain obtuse messages,” she added.

It is no coincidence that the retail giant has been trying to reach the audience with cultural content that is easily accessible to the general public.

Since the first shop was established in 1979 in Sogong-dong, central Seoul, the affiliate has distinguished itself by targeting more of the gneral public, unlike two of its rivals, Hyundai and Shinsegae, which aim to retain an upscale image.

This is why Lotte Department Store manages its luxury branch, Avenuel, separately from its main mall, which is equipped with much more diverse and moderately priced labels including the fast-fashion brands Zara and Uniqlo.

Sponsoring public art - the biggest benefit of which is that it can be accessed and enjoyed by anyone who wants to see it - was in line with the shop’s identity.

“As a department store, we have to think about what the public would like to see and easily understand instead of supporting fine art that incorporates philosophical thoughts,” explained Lee.

This is also why the two aforementioned public art projects sponsored by the company used an interesting way to interact with audiences.

For the “1600 Pandas +” project, social media has played a vital role.

The project, which tours around the world and places the pandas in selected landmarks, posts its next stop on its official social media accounts, which include Facebook and Instagram.

For those who want to see the pandas with their own eyes, they have to consistently keep up with the project’s online accounts.

“We didn’t want this project to end as just artwork, but wanted to encourage participation from the audience through various campaigns and events,” Lee explained.

“This is why we actively use social media. We wanted to induce communication among the public in real-time, regardless of time or location.”

When the pandas finish their country tour, making stops at several areas in Korea including Incheon and Busan, the project’s main exhibition will take place from July 4 and will continue for a month in an open space near Seokchon Lake where an unprecedented 1,800 papier-mache pandas will be unveiled.

The extra 200 figures represent the number of newborn pandas since the project’s first installation in 2008.

By the end of the project, people will be able to buy the exhibited paper-made pandas.

The profits will be donated to WWF, according to the company.

For more information about the remaining schedule for the panda display and the main exhibition, visit www.1600pandas.kr.