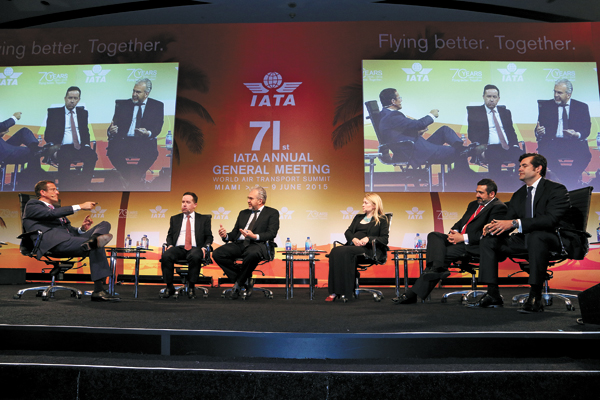 On the last day of International Air Transport Association’s (IATA) Annual General Meeting, the heads of airlines and people from the tourism industry took a close look at evolving demands of younger, tech-savvy consumers during a panel discussion “Meeting Evolving Consumer Demands.”

Jen Durkin, founder and CEO of Project Travel, said that airlines struggle to meet the needs of “millennials,” a demographic of people born between the early 1980s and 2000s that favor digital gadgets. Project Travel is an online peer-funding organization that helps students raise money needed for overseas internships and studies.

“They want to be connected [while flying],” she said. “They want to know what their bags are doing and other real-time information. Consumers don’t see airlines meeting those demands.”

Some airlines including Emirates, Etihad Airways, Singapore Airlines, United Airlines and Delta Air Lines have Wi-Fi on flights, while other carriers including Qantas and airline companies based in China don’t.

Alan Joyce, the CEO of Qantas Airways, said that those services “depend on individual segments,” implying that the demand is not mature enough to install the service on all routes.

During the annual gathering, the aviation organization raised its forecast for 2015 profits to $29.3 billion, a 17 percent increase from a previous projection six months ago.

The revised profit forecast is almost double from last year as lower oil prices are expected to boost the fortunes of the airlines.

The organization said U.S. airlines are leading the industry in terms of profitability with half of profits expected to be generated in North America.

“The U.S. is our industry’s most impressive turnaround story,” said Tony Tyler, CEO of IATA. “Airlines here are investing more than $1 billion per month in their product and adding services to meet rising demand for connectivity.”

Tyler also criticized politicians who called for carriers to cut fares because of cheaper oil prices.

Around 1,000 delegates attended the event hosted in Miami.

Headquartered in Montreal, the IATA is a global association of the world’s 256 member airlines. Along with the CEOs of the major carriers, shareholders, high-ranking officials from governments, international organizations and aircraft manufacturers also participated in the event.

The next host city is Dublin, and Irish flag carrier Aer Lingus will host the 2016 IATA summit.