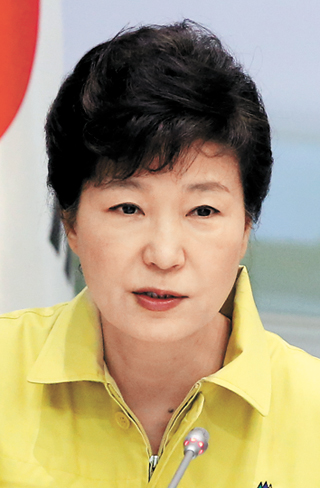 President Park Geun-hye postponed a trip to the United States next week in order to help fight the deadly outbreak of Middle East respiratory syndrome (MERS) at home, the Blue House said Wednesday.

“This week will be the watershed for the outbreak through the third generation of transmission, and ministries and experts are doing their best to stop the spread of MERS,” Kim Sung-woo, presidential senior secretary for public affairs, said Wednesday morning. “And yet, the people are still feeling insecure and President Park has decided to delay her trip to the United States for the sake of public safety.”

Park was scheduled to leave for Washington on Sunday and have a summit with U.S. President Barack Obama on Tuesday, her fourth. She was to visit Houston, Texas, Wednesday and Thursday and return to Korea on Friday.

Kim said Park has carried on with her presidential diplomacy in the past during times of hardship at home, but decided to reschedule the visit to the United States because public safety is her top priority.

While no new dates have been agreed to, Kim stressed that the trip is not canceled and will be rescheduled. “We have already sought the understanding of the U.S. side in advance, and the two sides agreed to reschedule the trip at the earliest convenient date,” Kim said.

Demands have intensified that Park stay in Korea to oversee the nation’s battle against MERS, but through Tuesday the Blue House said there was no change in the schedule. A senior presidential official said Seoul and Washington agreed on the delay only on Wednesday.

The ruling and opposition parties both supported the decision.

“Park’s decision appeared to be based on the social, economic and psychological impacts of the MERS outbreak,” said Rep. Kim Young-woo, spokesman of the Saenuri Party. “The government must do its best to have thorough follow-up measures to avoid any possible diplomatic fallout.”

The New Politics Alliance for Democracy (NPAD), which has pressed Park to cancel the trip, particularly welcomed her decision. “Taking into account the MERS situation, she made the right decision,” said NPAD Chairman Moon Jae-in.

“Prime Minister [Shinzo] Abe of Japan had visited the United States and Chinese President Xi Jinping is also scheduled to visit the country, so I thought Park’s trip was scheduled at an appropriate time,” he said.“The Blue House appeared to have made a difficult decision [on delaying the trip] because of MERS. The decision seemed to be based on whether the situation will improve or not, and I think the presidential office couldn’t tell and couldn’t delay the decision any more.”

Foreign affairs and security experts had earlier said the trip was important because it was scheduled at a sensitive time for regional security. Last month, North Korea test-fired a submarine-launched ballistic missile - a nightmare not only for its Asian neighbors but also for the United States.

The Park-Obama summit next week was also to follow steps by Tokyo and Washington to deepen their alliance. Japanese Prime Minister Shinzo Abe visited Washington in April.

The trip was also expected to address the possibility that the U.S.-led Terminal High Altitude Area Defense (Thaad) system, an American-built anti-ballistic missile defense shield, would be placed in Korea. China and Russia have publicly protested that plan.

Despite the security issues, the Park administration made clear that diplomacy cannot be a priority over the people’s safety and domestic politics. The president has a track record of leaving the country at inopportune times.