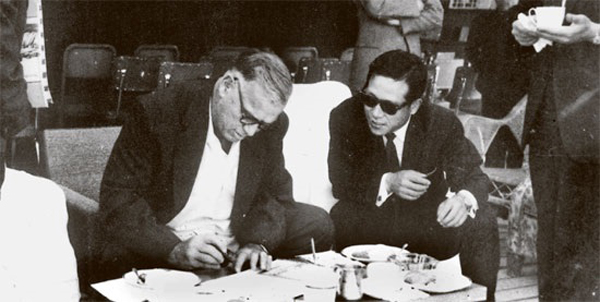 James Van Fleet, the commander of the U.S. Forces Korea (USFK) during the 1950-53 Korean War, signs a guestbook during his visit to the construction site for Walkerhill Hotel on July 14, 1962, with Kim Jong-pil sitting to his right. Walkerhill was named after former USFK Commander Walton Walker, who died in 1950 at the height of the conflict. Taken from the book “Walkerhill’s Thirty-Year History”

When I headed the Korean Central Intelligence Agency (KCIA) as its first chief (1961-1963) rumors about embezzlement scandals emerged alleging that I had misappropriated funds using my power in office. The four scandals were related to the construction of the Walkerhill Hotel, the state’s intervention in the stock market, the launch of Saenara Motors and the spy agency’s alleged involvement in the gambling business.

The rumors that I was deeply involved in unethical transactions to make illicit political funds gained credibility, as well as generated gossip that the revolutionary forces were preparing to launch a political party. In short, these falsehoods were spread by those who were against me, those who did not like seeing me at the center of the agency.

In our defense, we never misappropriated funds that should have been spent on Walkerhill’s construction. On whispers about stock market manipulation and the launch of Saenara Motors, some agents were corrupt. But the rumor that the spy agency was involved in the gambling business was a flat lie.

The rumor concerning Walkerhill alleged that I had pocketed construction money for the hotel and used it as political capital to help launch the Democratic Republican Party (DRP). That was completely groundless. 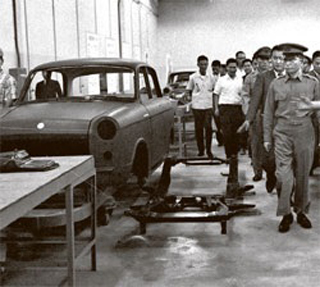 We started construction in March 1962, and it was completed 10 months later on a Seoul mountain overlooking the Han River. The hotel took $2.2 million to build.

To cut down on costs and construction time, I recruited prisoners and conscripted soldiers as laborers. We were also aided by military vehicles provided by the Army, Air Force and Navy. There might have been some irregularities when it came to construction efforts, such as the mobilization of inmates, but we did not embezzle construction funds.

Before the construction, experts estimated it would require $8 million to $10 million at minimum to build Walkerhill, but we managed to build it with just one-fifth of that because of the cooperative effort put into it, though it may have been done without due process.

There was a reason why I was on the forefront of Walkerhill’s construction as the head of the KCIA.

In October 1961, I had a meeting with Guy Meloy, the commander of the U.S. Forces Korea (USFK) at the time.

During the meeting, he said the country could fall victim to a second North Korean invasion without U.S. forces on the peninsula, noting that more than 30,000 U.S. soldiers in the South typically went on vacation to Japan.

He said the situation could be dire if we thought about all the time it would take to have these men return to South Korea from Japan. He asked me if the Korean government could build a resort so his men would not have to fly to Japan for R&R.

I thought it was an excellent idea. The new resort would bolster national security by keeping soldiers here and also serve as a means to earn foreign capital.

I did not waste a day in pushing forward with the construction. I later heard that the Japanese hotel business, worried that it could lose a vital revenue source, lobbied against Walkerhill’s construction.

The hotel’s name was chosen to honor former USFK Commander Walton Walker, who died during the height of the 1950-53 Korean War on Dec. 23, 1950, [in a road accident] on the western frontline.

General Walker was a veteran soldier who also fought against Nazi Germany and took part in the Incheon landing operation that shifted the tide of the war in favor of the allied forces.

During its first years, Walkerhill only accepted foreign guests, most of whom were men in uniform and their relatives. It also served as a place for visiting foreign dignitaries and leaders. In 1963, the revenue Korea incurred from spending by foreign tourists stood at $5.2 million. Of that, $2.2 million came from United Nations allied soldiers, and of that $2.2 million, 43 percent came from Walkerhill.

I recently had a luncheon at Walkerhill with one of my longtime friends, where I told him, “I have been attacked many times for allegedly embezzling funds related to this hotel. But when I see this hotel full of visitors this day, I feel proud of what I did back then.”

The rumor on the stock market manipulation, on the other hand, surfaced when the bubble burst on more than 5,000 domestic investors in May 1962. It was true that I was involved in creating a stock market bubble at the time. I thought that we needed to inject capital into the financial market to revitalize it.

Back then, there were only about 10 listed companies and the stock market could not function for its intended role due to its tiny size. I had my subordinates form investment funds and put them into the market. In their efforts to come up with funds, KCIA agents pocketed money to fund the soon-to-be launched RDP.

I was neither aware nor briefed about the money being appropriated for the party. But I do feel responsibility for causing financial damage to investors at the time as the head of the organization running the operation. While it is true that I ordered the investments with good intentions, it is also true that it inflicted damage.

I was also at the center of the plan to launch Saenara Motors, which can be translated as the “new country’s auto company.”

I pushed for the launch by importing parts from Nissan vehicles and assembling them on a production line in Bupyeong, Incheon. We [planned to] set up Saenara Motors, with 70 percent on loans and 30 percent invested by a Korean-Japanese businessman.

We also built a production line in Bupyeong that was capable of producing 6,000 vehicles a year. But a myriad of problems soon emerged. The most daunting issue was that we could not receive investment funds from Japan from that businessman, Park Noh-jeong, via a bank transaction because Seoul had not normalized diplomatic relations with Tokyo.

Facing other difficulties, the company went bankrupt after it had produced just 2,700 vehicles up to May 1963. Some whispered that I had embezzled 2 billion won ($1.8 million) from the production line to fund the RDP. All of these clams do not bear a single grain of truth.

In politics, I am very well aware that it is the outcome that matters, not the process or how good intentions were. On that note, I do feel responsible for these rumors or that they ended up upsetting some people.