Make-or-break week to stop the spread of virus

Make-or-break week to stop the spread of virus 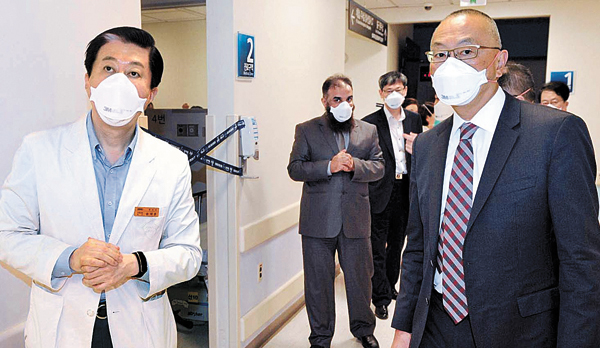 With 13 new MERS patients announced Wednesday, including 10 who contracted the disease at Samsung Medical Center in Seoul, where most third-generation infections occurred, Korea so far has seen 108 cases.

The deaths of Patients No. 76 and 90 were reported, bringing the death toll to nine. Eleven patients are in unstable condition.

But a total of four MERS patients have been discharged from hospital and sent home as they are fully recovered.

The government believes this week will determine whether the outbreak will start petering out or continue to expand. The most important issue at this stage in the outbreak is whether there are any fourth-generation infections. So far, none have been reported.

“To stop the spread of MERS, we need to rely on the world’s finest medical services in this country and, most of all, the trust and cooperation of people,” Choi said. “Since the disease is spreading within medical facilities, it is key to prevent transmission not just within hospitals but between hospitals as well.”

The government also designated 48 hospitals as being dedicated to MERS patients.

“There are 32 hospitals that treat potential patients who were exposed to MERS, and 16 other hospitals dedicated to treating confirmed MERS patients in serious condition,” said an official of the Ministry of Health and Welfare. “Some of them are already operating and we are planning to add some more.”

The government is also designating so-called “safety hospitals,” where people can visit without worrying about MERS infections. They are for people with medical conditions totally unrelated to MERS or other respiratory infections.

“We would like to ask those who are not potential patients to visit safety hospitals,” Choi said. “In case of emergency situations, please use emergency rooms that have separate tents for potential MERS patients.”

The safety hospitals are only a temporary arrangement until the outbreak ends. The government is discussing them with the Korean Hospital Association and is disclosing a finalized plan Thursday.

A state-run MERS web portal (www.mers.go.kr) was launched Wednesday, which provides general information about the disease, including lists of MERS patients, hospitals that treated MERS patients and those who are under government quarantines. It gives guidelines on where people can report their suspected MERS symptoms.

Seongnam Mayor Lee Jae-myung was criticized after disclosing the name of an elementary school attended by children of a MERS patient on his social networking service account on Saturday.

The Geumcheon District Office revealed the occupation and workplace of the first foreign MERS case in Korea, Patient No. 93, on Tuesday.

The Dongjak District Office also issued a press release about a patient who tested positive in an initial examination, revealing his workplace, address and hospitals he visited.

The Seoul Metropolitan Government stepped in and announced that it will collect all data in the capital and become the only authority releasing data on MERS. The city government previously insisted on not disclosing the number of patients in each district, but reversed course on Wednesday.

But the city government disclosed too much. Personal information about 150 potential patients was uploaded on the Seoul Metropolitan Government’s website for 11 hours.

The document included names, cell phone numbers and their responses to isolation measures. The 150 people were employees in the building that Patient No. 35 visited before he was diagnosed with MERS.

Kim Chang-bo, a health official of the Seoul city government, said, “It was a mistake by one of our employees, and we promise it will never happen again.”

Meanwhile, the Seoul Metropolitan Office of Education on Wednesday decided to continue its suspension of kindergartens and elementary schools in the MERS-confirmed areas of Gangnam and Seocho districts. Cancelling classes mean that students are not coming school but teachers are still working.

The office gave orders to 69 kindergartens and 57 elementary schools in the two districts to cancel classes from Monday to Wednesday. The order is extended until Friday.

The municipal education authority is advising Gangdong, Songpa, Gangseo and Yangcheon districts, which are adjacent to Gangnam and Seocho, to cancel class as well, but the decisions depend on each school’s principal.

There haven’t been any MERS cases among teachers or students yet in Seoul. So far, a total of 559 schools have canceled classes in Seoul, and 2,474 schools nationwide.

However, a debate over whether closing schools is appropriate is ongoing. The Korea-World Health Organization Joint Mission recommended the country reopen schools.

“Strong consideration should be given to reopening schools, as schools have not been linked to transmission of MERS-CoV in the Republic of Korea or elsewhere,” read the 16-man team’s Initial Recommendations to the Korean Government on Wednesday.

WHO Assistant Director-General Keiji Fukuda, who’s co-heading the team, previously said closing schools is “too much.”

The Joint Mission has been handling epidemiological investigations, quarantine measures and analysis of the MERS coronavirus since Tuesday.