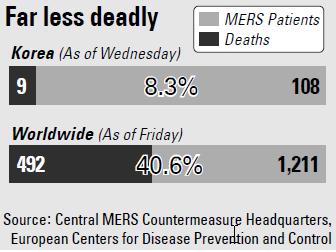 The outbreak of Middle East respiratory syndrome (MERS) in Korea is a lot different from in the Middle East - and the reasons why have yet to be determined.

When the first patient was reported on May 20, it was known from the Middle East that the disease is not very infectious but has a high fatality rate.

But in Korea, the situation has been completely the opposite.

As of Wednesday, a total of 108 people had contracted the disease and nine died. The fatality rate stayed at 8.3 percent as of Wednesday, much lower than the 40.6 percent worldwide cited as of Friday by the European Centers for Disease Prevention and Control (ECDC).

The Korean Centers for Disease Control and Prevention (CDC) depended on data from foreign cases, which indicated that a MERS patient usually infects 0.6 to 0.8 people.

“[MERS in Korea] seems more infectious because it has spread among hospitalized patients with weakened immune systems,” said Oh Myoung-don, a professor of infectious diseases at Seoul National University Hospital.

In Korea’s outbreak, even people exposed briefly to MERS patients have caught the disease. Patient No. 92, a 27-year-old security guard at Asan Medical Cener in Seoul, was infected by Patient No. 6 after they interacted for just 10 minutes in the emergency room. A man in his 40s contracted the disease after he visited a patient at Pyeongtaek St. Mary’s Hospital for only 30 minutes.

According to the Korean Society of Infectious Diseases, which looked at 58 confirmed MERS patients, major symptoms for those patients were fever (89.6 percent), cough (34.4 percent), chest congestion (24.4 percent), muscle aches (24.4 percent) and difficulty breathing (18.9 percent). One was totally asymptomatic.

The society said about half of the patients saw their body temperatures return to the normal range on the seventh day after exhibiting symptoms.

In cases reported in foreign countries, the MERS coronavirus is known to attack the lungs and kidneys at the same time, but only 4 percent of the patients studied in Korea had kidney involvement.

“It is clearly different from Saudi Arabia, where half of MERS patients had chronic renal failure,” said Kim Woo-joo, the society’s chairman, “and it will decrease the fatality rate of MERS in Korea.”

And yet a comparison of the RNA of the virus in Korea and in the Middle East showed they were over 99 percent similar, signifying no mutation.

The higher infection rate is also being blamed on crowded hospital rooms in Korea. Out of 95 patients as of Tuesday, 55 people (or 55.8 percent) first visited hospitals for treatment for other complaints, and at least 10 contracted the disease while staying in the same hospital room with MERS patients.

According to research by the Korea Health Industry Development Institute in 2012 on 152 local clinics and smaller hospitals, the most common type of hospital room was a six-patient room, followed by five-patient rooms, seven- to 10-patient rooms and four-patient rooms.

“In the United States, most hospital rooms are for one or two people, while Korean hospital rooms accommodate multiple people and that has contributed to the spread of MERS,” said Dr. Antonio Crespo, who treated a MERS patient in Florida.

The hospital rooms are even more crowded because family members usually take care of patients, and visitors are allowed at any time. While only nine out of 108 patients as of Wednesday were doctors or nurses, 23 were family members or private nurses, and 12 others were visitors.

In many other countries, visiting hours are strictly controlled and nurses care for patients.

If either the patient or doctor thinks more serious treatment is needed, they are given a letter to go to a second- or third-stage hospital. This is why several MERS patients visited several hospitals before they were correctly diagnosed. Their initial symptoms would have appeared to be mere colds.

This includes Patient No. 1, who visited four hospitals before being diagnosed at Samsung Medical Center on May 20. He infected up to 35 people at the second hospital he visited, Pyeongtaek St. Mary’s Hospital.

It also includes Patient No. 14, who contracted the disease from Patient No. 1 at Pyeongtaek St. Mary’s and then moved on to Samsung Medical Center, where he infected 47 others in third-generation transmissions. Emergency rooms at general hospitals treat anyone who walks in.