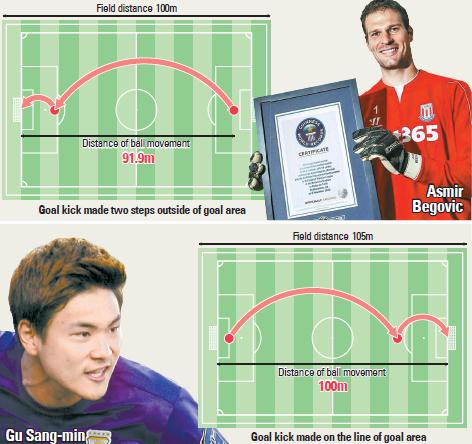 When goalkeeper Gu Sang-min scored from 100 meters (328 feet) in the Korea National League last year, he expected a spot in the Guinness Book of World Records. Instead, his league got a bill for 30 million won ($27,000).

The league hired a private agency to navigate the Guinness application process. But the agency said it would cost 30 million won to get the Ulsan Hyundai Mipo Dolphin FC player’s goal recognized.

“Since our budget was tight, we couldn’t afford to spend that kind of money to preserve one player’s record,” said an official from the N-League. The league eventually gave up on the effort.

The current world record is 91.9 meters, held by goalkeeper Asimir Begovic, who plays for Stoke City FC in the English Premier League. Just 13 seconds after kickoff against Southampton on November 2, 2013, the 27-year-old Bosnian scored on a lofty kick that bounced once and sailed over the head of goalie Artur Boruc.

Begovic’s score was officially approved as the world record in September 2014.

Gu’s goal came on July 25, 2014, during a match with Gimhae City FC. Five minutes into the second half, the 23-year-old made a goal kick, and the ball went into the net after a bounce.

N-League officials later measured the distance of the kick and announced it’d been 100 meters. Although the exact distance can be changed later, N-League officials are confident that Gu’s goal was longer than Begovic’s. They say the review shows Gu making his kick from two or three steps behind where Begovic scored from.

But this year, there’s new hope for Gu’s record. The Korea Record Institute (KRI), which reviews and authorizes various local records for Guinness and the World Records Academy, and announced it would help pay for some records set in Korea to get recognized abroad.

“For a record that is valuable and uncommon, we will cover part of the registration and certification fees to get it entered into an overseas institution,” the official from the KRI said.

While the N-League is preparing to list Gu’s scoring record again, the KRI raised questions about the legitimacy of the private agency that was originally hired to help get the goal certified.

“When applying for the Guinness World Record, you need to pay for things like translating documents and hiring a third-party notary service, as well as various other labor costs,” Kim Il-hwa, the head of the KRI, said on May 27.

“But unless you’re making promotional videos or posters, there’s no way it should cost millions of won to file an application. I think the private agency overcharged on its commission fee.”

Other record holders are applying for KRI’s support, but Kim said that unique records like the world’s longest goal have good chance of getting funded by the agency.

The N-League said that it will soon finish gathering the videos, photos and witnesses statements for the KRI to review. Just like Begovic’s goal, it will take some time for Gu’s goal to be recognized as the official world record, but once it is confirmed, Gu said he knows his name will be forever engraved in Korean football history.

“How often can you become a world record holder as a footballer?” Gu said.

“Last year, I was disappointed when I heard my chance of getting listed in the Guinness World Records was gone, but now that the possibility is revived, I’m really thrilled.”