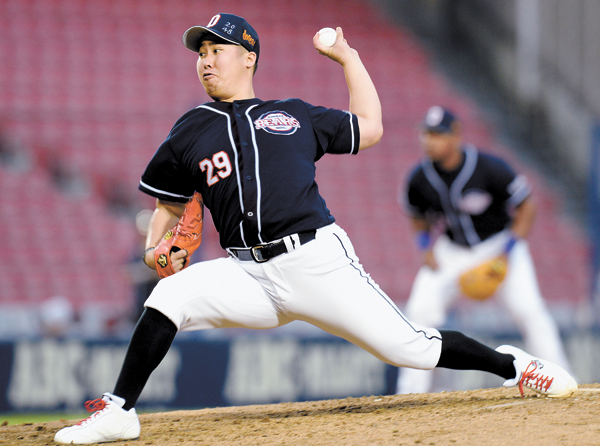 Doosan Bears pitcher Yoo Hee-kwan is throwing slower than ever, but you wouldn't know it from his recent performances.

After letting the bases get fully loaded against Seoul rival LG Twins on Tuesday, the 29-year-old struck out Yang Suk-hwan, Yoo Kang-nam and Hwangmok Chi-seung in a row.

Yoo’s quickest fastball was just 133 kilometers (82.6 miles) per hour in the game at Jamsil Baseball Stadium, but the Twins couldn’t make contact. The southpaw eventually collected his eighth win of the season after giving up only one run in 5 2/3 innings. He’s currently tied for most wins with Samsung Lions’ right-hander Alfredo Figaro.

These days, his fastballs rarely top 135 kilometers per hour. But with his impressive control and ability to change up his speed, Yoo is evolving into a pitcher that batters can’t easily shrug off.

“What may be different from the past is my ability to keep my composure on the mound,” he said.

Yoo, who made his professional debut in 2009 with the Bears, is now 8-2 with a 3.15 ERA in 12 starts in the Korea Baseball Organization (KBO) League. His record is comparable to national team lefty aces like the Kia Tigers’ Yang Hyeon-jong, who is now 6-2 with 1.58 ERA, and the SK Wyverns’ Kim Kwang-hyun, who has amassed 7-1 with 3.97 ERA.

With no big injuries reported so far, Yoo is known for his agility and durability, throwing an average of 106 pitches per game and taking 80 innings this season, the most among Bears pitchers. On May 10 against the Hanwha Eagles, Yoo had the first shut-out of his career.

After graduating from Chung-Ang University, he joined the Bears as the 42nd pick of the draft and wasn’t a fan favorite. Many believed the stereotype that a pitcher without a fastball is destined to fail.

In his debut year, Yoo played 16 games - marking a 4.05 ERA with no wins or losses - and then joined the Sangmu baseball team for his military service in 2010.

While lefty pitchers usually throw better against lefty batters, the opposite has been true for Yoo. Until last year, his batting average for lefty batters was .337, significantly higher than his average for right-handers, at .259.

To overcome this weakness, Yoo said he learned how to throw a forkball, but didn’t often use it in actual games because he felt too much pressure. He’s since decided to boost his changeup, and it seems to be working.

“I think he’s really found confidence in pitching outside changeups for lefty hitters,” said Skysports analyst Kim Jin-wook, who was the Bears manager from 2012 to 2013. “Yoo is a really smart guy who changes his pitching patterns during games. He will deliver better performances in the future.”

With his cheerful demeanor and sense of humor, Yoo has become a favorite among Bears fans. Now, he has his eyes set on becoming a KBO All-Star for the first time.

In the KBO’s list of All-Star candidates for the “Dream All-Star Team” - which will be composed of players from the Doosan Bears, Samsung Lions, SK Wyverns, Lotte Giants and KT Wiz - Yoo’s name appears in the starting pitchers category. The voting results will come out on July 6.

“If I can’t make it through a fans’ vote, I really want to play in the All-Star Game with a manager’s recommendation,” he said.