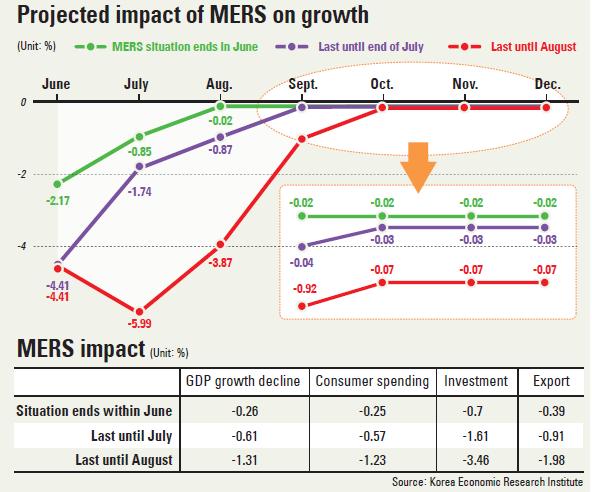 They promised to urge their member companies to maintain their planned business activities to encourage consumption among consumers.

“We [the private sector] will continue business activities as much as possible to prevent any setbacks from happening in industrial production and continue the investments planned earlier in the year,” the organizations said in a statement.

“We hope the government does its best to stabilize people’s consumption sentiment and revitalize the economy, and that the National Assembly passed related acts,” the statement said.

Vice Finance Minister Joo said he hopes to work closely with businesses to ensure they keep on investing in new projects to create jobs and encourage spending so Korea’s economy in the second half is not hurt too much by MERS.

However, he expressed concern about plunging sales of consumer goods, as well as declining cultural and leisure activities and tourism.

A report released Thursday by Korea Economic Research Institute (KERI) estimated gross domestic product will shrink as much as 0.31 percent, or 20.9 trillion won ($18.8 billion), if the MERS crisis isn’t over by the end of August.

The GDP damage was estimated to be 4.4 trillion won, or 0.26 percent, if MERS ends this month, according to the report. If the crisis fades by the end of July, the damage will be about 9.3 trillion won, or 0.61 percent of national GDP.

The report said that if MERS continues through August, the greatest economic damage will be to the value of investment (as much as 3.46 percent lower), exports (1.98 percent) and domestic consumption (1.23 percent).

Considering the coming months are a peak vacation time, the report expects significant damage in tourism, food and beverages, and medical services, as well as shipping.

From the production side, the report said damages could hit 61.8 billion won in August due to an estimated 20,604 quarantined workers.

“If the crisis lingers long term, the Korean economy will be seriously damaged,” said Kwon Tae-shin, head of KERI. “Considering the global trade environment that makes the situation even more difficult for Korean exports, foreigners will be hesitant to invest and buy Korean products if we stay anxious and panicked.”