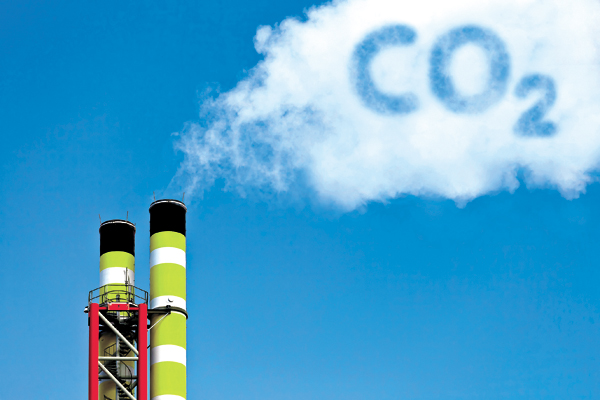 The government rolled out four possible scenarios for carbon reduction goals ranging from 15 to 30 percent, which satisfy neither environmentalists nor businesses.

These goals are based on a new calculation of carbon emissions in 2030 based on gross domestic product growth of 3.08 percent annually, plans for new energy supplies and recent international oil prices.

The reduction goals announced for the four scenarios would be easier to meet than the current goal of 30 percent under business activities as usual (BAU) in 2020 that was set in 2009, which has stirred opposition from manufacturers as being too strict and threatening their competitiveness against China and Japan.

A study by 15 energy and economy-related research institutes estimates Korea will emit 782.5 million tons of carbon dioxide annually in 2020 and 850.6 million tons in 2030. 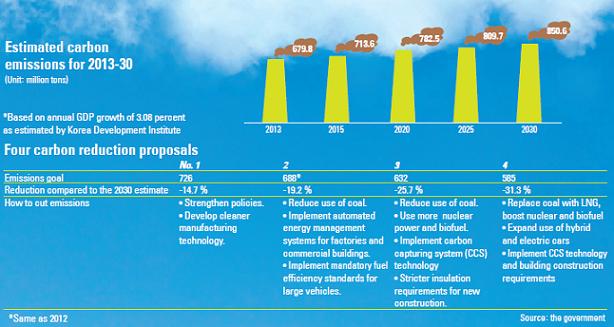 “The first scenario would be achievable just by strengthening current reduction policies, and the other three would require spending by the government and private sector,” said Yoon Seung-jik, a senior official at the Ministry of Environment. “Especially, the No. 4 plan was calculated based on all possible technological development and reductions taking place.”

To achieve the 14 percent reduction, Korea would need to strengthen current policies like the carbon trading system. The other levels would require decreasing the use of coal, while boosting power generated by nuclear, biofuel and LNG; commercializing carbon capture technologies; and implementing stricter construction rules and automobile fuel economy standards.

Climate change experts criticized the government’s carbon reduction scenarios for breaking the Lee Myung-bak administration’s promised goal and using the BAU standard, which is considered unsuitable for a country of Korea’s economic status.

The Lee administration in 2009 announced that Korea would reduce emissions by 30 percent of BAU in 2020. That goal remains on the United Nations Framework Convention on Climate Change (UNFCCC) website and has been maintained since President Park Geun-hye took office.

So the Ministry of Environment last year rolled out a detailed carbon reduction road map based on the 2009 goal.

However, Thursday’s emissions reduction plan didn’t mention it, instead suggesting a larger estimate of total emissions and eased reduction goals.

Regarding criticism that UNFCCC countries agreed on a so-called “no backsliding” principle at the Peru meeting last year, Lee Seong-ho, head of the international economy division at the Ministry of Foreign Affairs, emphasized that Lee’s 2009 goal was voluntary, saying “technically Korea is not going backward, because Korea is a developing nation which is not legally bound” to the UN framework, unlike advanced economies like the United States and European countries.

Some experts say Korea shouldn’t calculate its reduction goals based on BAU, because a high overall estimate allows the country to actually reduce emissions less. BAU-based estimates typically result in lower overall levels of emissions than estimates based on a single year.

Meanwhile, only a few developing countries like Mexico and Gabon use the BAU standard, and their reduction goals are 40 percent and 37 percent, respectively.

In Korea, the private sector sees the new estimate and suggested reduction goal scenarios as still too strict, considering the state of the domestic economy and uncertain future of the global economy.

“Because local production lines have already reached the world’s top level when it comes to energy efficiency, meeting the No. 1 scenario [a 15 percent reduction from BAU emission in 2030] won’t be so easy,” said Yoo Hwan-ik of the Federation of Korean Industries. “Excessive reduction goals may put Korea on a path of extended low growth.”

Yoo emphasized that the 2030 emission estimate of 850.6 million tons is too low, saying it should be at least 900 million tons considering Korea’s heavy dependence on manufacturing.

The four scenarios will undergo public hearings before being finalized and submitted to the United Nations by end of this month.