Korea’s central bank lowered the key interest rate to a new record low amid concerns over the national economy largely contributed by the recent outbreak of Middle East respiratory syndrome (MERS), which has affected consumer spending.

Exports, which turned out to be struggling much more than expected, was another contributing factor to the rate decision.

The Bank of Korea on Thursday shaved 0.25 percentage point off the interest rate, bringing it down to a new historic low of 1.5 percent.

“Exports have been more sluggish than we expected and consumer spending, a key factor in [the economic] recovery, has been impacted negatively,” Lee said, referring to MERS. “The downside risk has grown and the biggest factor [at this juncture] is MERS.”

The central bank governor added that Thursday’s rate cut was a preemptive move, with downside risk having grown since earlier this year.

The central bank will likely lower its growth forecast in July, he said.

In its last outlook, released in April, the BOK cut its growth forecast from 3.4 percent to 3.1 percent.

However, it still expected the economy would pick up momentum in the second quarter, believing the aggressive monetary policy actions it had taken since the second half of last year would begin having an effect.

The central bank has cut the key interest rate three times before; the first rate cut was made in August, followed by another in October and again in March.

In May, Lee was confident that the economy was showing signs of an upswing, which resulted in the BOK freezing the key borrowing rate at 1.75 percent that month. But the situation has quickly turned south over the past two weeks. 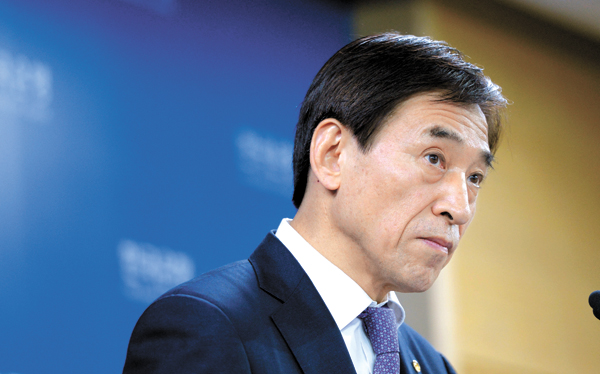 The first patient in Korea was diagnosed with MERS on May 20. But it was only after two subsequent patients died on June 2 that public panic really became palpable. Most people took precautionary measures, avoiding crowded areas, malls, discount stores and other venues including amusement parks.

So far, there are more than 100 confirmed MERS cases, with the death toll now at 10.

Other institutions have already lowered their economic outlooks for the year. BNP Paribas in a report released Thursday projected that gross domestic product (GDP) would expand 2.7 percent. However, it was quick to add that the impact of the MERS outbreak had the “potential” to further bring down growth.

The Korea Economic Research Institute, under the Federation of Korean Industries, released a similar study in which it concluded that if the situation was contained within the month, GDP would only dip 0.26 percentage point.

Though, if it continues until August, GDP would dip 1.31 percentage points. By value, the Korean economy would lose more than 20 trillion won ($17.9 billion).

The outbreak’s impact will not be limited only to consumer spending but also on investment and exports.

If the MERS situation is contained by the end of this month, consumer spending growth would only see a decline of 0.25 percentage point.

But if it extends as long as August, that decline would further widen to see a 1.23 percent drop.

The forecast is similar for exports.

Exports will only see a 0.39 percentage point decline if the situation is resolved within this month, but when it extends to August, export growth will be nearly 2 percentage points lower.

Investment will see a bigger impact, with a 0.7 percentage point cut in annual growth, though it could see a sharper decline, losing nearly 3.5 percentage points from growth.

According to the BOK governor, the decision to cut the key interest rate was not unanimous, with one committee member suggesting to freeze the rate at 1.75 percent.

The committee did, however, agree that the rate cut should not exceed more than 0.25 percentage point.

In fact, the move to limit the rate cut seemed to have stemmed from concerns over the rapid growth of household debt.

After the central bank brought down the key interest rate from 2 percent to 1.75 percent in March, household debt soared, adding more than 10 trillion won in new loans.

An aggressive monetary policy coupled with deregulations on real estate loans has led household debt to rise quickly, despite the fact that increased spending among consumers has contributed to improving the domestic market.

“It is true that household debt will grow due to the rate cut and that the risk accompanied by it has grown, but we concluded that it is more appropriate to first address macroeconomic flow, which is faced with downside risk, so that it would not worsen,” Lee said.

With May showing 10 trillion won in fresh loans, market analysts are certain that household debt, including credit card purchases, has already jumped over 1,100 trillion won - at the end of March, it already stood at 1,099 trillion won.

The practical effect of the rate cut, they say, will be limited as it was already at a low level and the interest rates at financial companies already incorporated the potential cut even before it was made.

Likewise, for this month’s rate cut to have a practical effect on the economy, it will take at least six months to a year. So the BOK’s target from the rate cut, in that case, is more psychological.

Now, the next biggest question is whether the BOK will decide on another rate cut.

Current predictions go that this month’s cut will be the last that the BOK pursues this year, particularly with the U.S. Federal Reserve having hinted that it will raise its interest rates, backed by strong economic recovery.

The interest rate hike is expected to take place in September.

Still, some experts have speculated that the central bank could once again lower the rate if the MERS scare continues to impact the Korean economy.

Mark Walton, an analyst for BNP Paribas, predicted that the BOK would likely refrain from further action, particularly since the decision to lower the key interest rate was not unanimous.

“Comments from Governor Lee implicating the limited effectiveness of lower rates suggest that another BOK cut could now be on hold,” he said.

However, “we think poor growth prospects and the MERS risk leaves the door open to further easing,” Walton added.