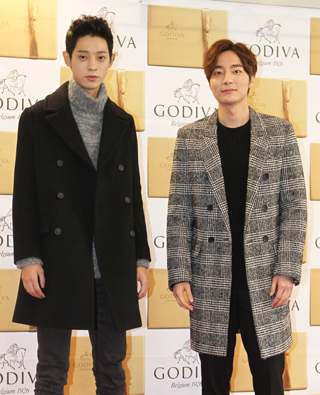 Male singers Jung Joon-young, 26, left, and Roy Kim, 21, will play cameo roles in the 10th episode of one of the hottest Korean dramas, “The Producers,” according to a person affiliated with the series on Thursday.

Since the show kicked off on May 15, many star celebrities have appeared on it, including singer Lee Seung-gi, actress Go Ara and actor Jang Hyuk.

As each have played different roles in the drama, the upcoming appearance of Jung and Kim leave many fans wondering what roles they will have in the episode that will air on Saturday.

The two musicians, who are known to be good friends, appeared in season four of Mnet’s “Superstar K,” a 2012 survival audition series, in which Kim was honored as the winner while Jung came in third place out of around two million applicants.

Jung officially debuted as a singer in 2013 with a single. Since then, he has been widening his roles from a singer to entertainer to actor.

The rocker is currently taking part in various reality programs such as MBC’s “My Little Television” and season three of KBS2’s “1 Night 2 Days.”

Kim, who is also working as a songwriter and a radio host, released his first single, “Spring Spring Spring,” in 2013, which gained a huge following at the time and is still frequently heard by the public during the spring season.

Since he started his career as a singer, he has achieved many musical feats, most recently taking home the “Favorite Foreign Artist” award at Taiwan’s “HITO Music Award” in May.