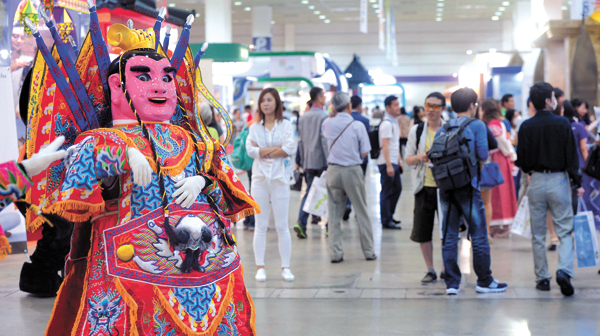 A person dressed in traditional Taiwanese theatrical costume greets visitors at the Korea World Travel Fair that opened Thursday at COEX in southeastern Seoul. The event, where numerous countries display their traditional attire and cuisine, usually attracts huge crowds. But with the continuing fear over Middle East respiratory syndrome (MERS), the exhibition was relatively empty compared to previous years. According to the Ministry of Strategy and Finance, MERS has caused people to avoid crowded places like amusement parks, museums and art galleries, all of which have seen a drop in visitors of nearly 50 percent or more in the first week of June compared to a year ago. [NEWSIS]