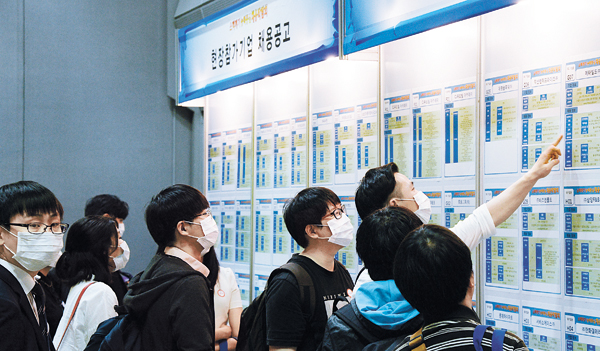 Middle East respiratory syndrome (MERS) is even affecting hiring in Korea, with the cancellations of major job expos for both young people and senior citizens and of job interviews and new-hire training sessions by major companies.

The Namyangju Job Expo for the Middle-Aged and Seniors, jointly hosted by the Gyeonggi Provincial Government and Namyangju City Government, was scheduled to take place on Thursday to fill some 120 positions at 35 companies based in Namyangju.

But on June 4 the job fair was postponed to prevent the spread of MERS in the area. It hasn’t been rescheduled.

“The main attendees of our expo are in their 50s and 60s, a vulnerable age group for catching MERS,” said the head of the job support team at Namyangju’s Employment and Welfare Center in a phone interview with the Korea JoongAng Daily.

“Because the job fair is a quarterly event, we’ll be hosting it in September,” he continued, “which may be a disappointment for some middle-aged residents who have retired from their careers and are looking for work.”

Most jobs offered are in production, product quality management, storage management, shipping and retail. They don’t pay that well but are above minimum wage and stable.

“Jobs offered through our fairs are, of course, better quality than what job seekers can find on their own [because the fair is hosted by the city government],” the official added. “The postponement doesn’t help local companies either because they still have to operate their factories, ship goods and sell them regardless of MERS.”

Of six job fairs planned by the Gyeonggi Provincial Government in June, five events in Pyeongtaek, Seongnam, Gapyeong, Hwaseong and Gwangmyeong have been canceled. The only one to take place was in Gimpo on June 2.

The spring hiring by companies is very significant for first-time job seekers. Some companies are reporting delays of interview sessions and cancellations of training sessions for new hires.

Hyundai Motor announced the result of job aptitude tests for the spring season hiring session for production workers last Wednesday, but decided to postpone the next step, which is interviews. The company usually invites parents and families of new hires to a welcome event, which was scheduled for June 5. But this year, due to fear of MERS, it did not invite recruits’ relatives.

LG Electronics postponed interview sessions for the domestic product sales division by seven days. It will hold it on June 19 and 20.

Summer is when local governments hold their civil servant hiring tests, but MERS is getting in the way.

The Seoul City Government on Thursday decided to carry on with the test scheduled for June 13, but new procedures were required for test takers who are under self-quarantine in their homes.

There are fewer than 10 quarantined applicants among 130,000 takers of the test, said Ahn Joon-ho, head of the Seoul Human Resources Development Center, at a press briefing on Thursday.

The Constitution guarantees equal rights to all citizens to take such a test, the government said.

People quarantined in their homes will be visited by a nurse, two civil servant test observers and one police officer.

“The hiring test will be conducted as scheduled,” Ahn said. “As no community transmission has been detected so far, we figured that the postponement of the hiring exam may cause confusion among the test takers and aggravation.”

Regarding questions of whether people taking the test at home will have an advantage, the Seoul government said people in quarantine will have less chance to cheat because they will be more closely observed.