When Park had trouble deciding whether to run

When Park had trouble deciding whether to run 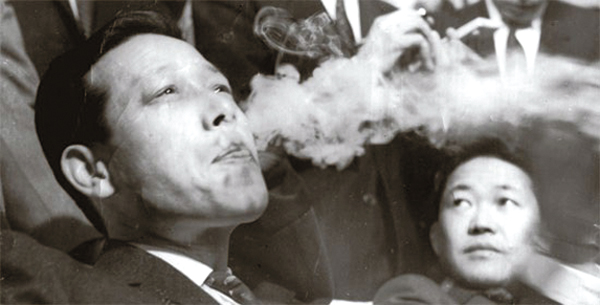 Kim Jong-pil smokes a cigarette at Gimpo International Airport on June 18, 1964 before he goes on his second overseas exile to take responsibility for the fallout against the Park Chung Hee government for negotiations with Japan to renormalize diplomatic relations.Provided by Kim Jong-pil

A smear campaign against me was on the rise as I concentrated my efforts on the launch of the Democratic Republican Party (DRP) that would represent the revolutionary forces [behind the coup d’etat]. People in the anti-Kim Jong-pil faction did not waste a minute before spreading rumors about me. I soon found myself at the center of burning controversies.

Those who opposed the formation of the DRP insisted that the revolutionary forces, including leader Park Chung Hee, must return to the military as promised in a declaration of promises to the people made on the night of the May 16 revolution [coup].

Then-Defense Minister Park Byung-kwon and Army Chief of Staff Kim Jong-oh were in the powerful circle that demanded Park return to the military. They had resented me, thinking that I - a mere colonel in the army - was taking the lead in setting the country’s course.

But the opposition only made me more determined to launch the DRP. I was preoccupied with the goal of providing Park with a support base strong enough for him to seize power as an elected president. I was increasingly worried that the revolution for which I risked my life could end up achieving nothing - unless we took the highest office with Park as the national leader. 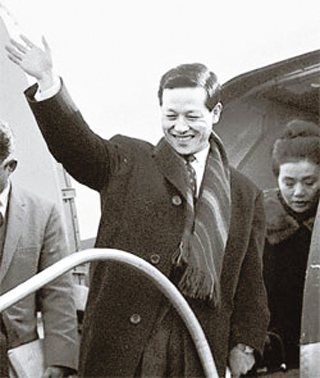 Kim Jong-pil waves as he boards a plane to go on his first overseas exile on Feb. 25, 1963. Standing next to him is his late wife Park Young-ok. [JoongAng Photo]

But increasing calls for his return to the military weakened his resolve. On Feb. 7, 1963, Park called me in for a meeting at a local hotel after he had visited the Jeolla region. Park told me he would not run for president. Shocked by his sudden declaration, I tried to change his mind.

What are you talking about?” I said. “Think about why we carried out the revolution, putting our lives at risk. We did it to rebuild this country. We can’t stop our mission just because some oppose your bid for the presidency.”

On Feb. 18, the chiefs of staff of the Army, Air Force and Navy visited Park’s office and reiterated their demand that he go back to the military no matter what. Park gave in to their pressure. That afternoon, Park stood before a camera to announce a declaration that he would not participate in the soon-to-be formed civilian government, meaning he would forsake any bid for the presidency.

The situation was getting increasingly urgent. I came to the conclusion that I should go in self-exile overseas to ease growing complaints against me and Park. Two days after Park’s declaration, I announced I would resign from all of my posts.

On Feb. 20, I went to Park’s Supreme Council office to tell him about my overseas trip.

“All the attacks have targeted me,” I explained. “It is in the best interest of all of us that I take leave for some time out of the country. You will have more space to use your political capital in my absence.”

A somber Park said, “Okay. I will take care of the mess once you leave.”

He must have faced a dilemma over what to do with me. While he was very aware of my role in cementing the revolutionary government and the building up of his future political support, too many were calling on me to leave the inner circle.

Park tried to console me. “Don’t think of your trip overseas as a hardship,” he said. “You will blossom like a flower after you get through a tough time.”

The next day, I saw Park again. He was having a chat with his longtime friend Suh Jeong-gui, who had repeatedly told him to return to the army. He was telling Park the same thing that night, which made me bristle.

“Mr. Suh, do you have any idea how we carried out the revolution in order to bring in a new set of rules? If you are going to keep saying the same thing to Park, you’d better leave now.”

I turned to Park, “The DRP will be launched as scheduled in five days. You can still make the best out of the new party for your political career even without me. With it, you will have a strong support base to become the next president.”

It was already past 1 a.m. and Park stopped me from leaving the office. “Suh was trying to help me with his advice. Don’t be mad at him.” I returned to my seat and the three of us drank until 3 a.m.

On Feb. 25, my family and I boarded a plane for a trip that had no scheduled end. During a press briefing shortly before I left for the airport, I was bombarded with questions as to why I was leaving the country.

I answered with a smile, “I am going on this trip half voluntarily and half forcibly.”

A day after I left the country, the DRP had a launch ceremony with 1,339 delegates in attendance. As I predicted, Park was nominated the party’s candidate for president. I followed the race and Park’s election through news reports in San Francisco. My first overseas exile ended on Oct. 23, a week after Park won. I initially thought my overseas trip would last about 50 days. It ended up being over eight months before my family and I returned to Korea.