Left: Middle school students from Bundang, Gyeonggi, board a raft to learn the traditional way to cross a river in Soomy Village in Gyeonggi. By Kang Jung-hyun Right: Children, mostly from larger cities like Seoul and Daegu, spend their time lying around in hammocks and playing outside in Bonghwa County, North Gyeongsang. By Gong Jeong-sik

Soomy Village in Yangpyeong County, Gyeonggi, is one of the most well-known agricultural villages in the country, considered a great place for locals and tourists alike to experience rural life.

Surrounded by the mountains and the Namhan River, the village saw about 60,000 visitors last year alone.

Similarly, Binari Village in Bonghwa County, North Gyeongsang, is generally regarded as one of the best places for older city-dwelling office workers looking to try their hand at farming ahead of retirement. The town is environmentally friendly with a rustic rural feel. 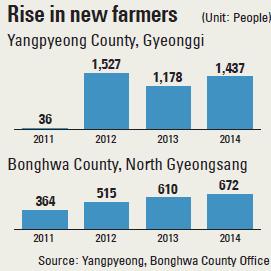 Of the 70 households in the village, 20 are owned by former urbanites looking to get into agriculture. And as their numbers increase, regional governments have begun looking to draw in more. But without something special to offer, like Yangpyeong and Bonghwa, it has been difficult to make those efforts visible.

Yangpyeong is actually seeking to raise its population. The county is less developed due to its designation as a protected area for drinking water and its inclusion on Korea’s greenbelt, where the government has restricted building.

And with a total area of just more than 878 square kilometers (340 square miles), it is about 1.5 times larger than Seoul.

Still, the area has seen a pretty substantial rise in its population recently. The village’s environmentally friendly cultivation methods have caught the attention of many workers who are considering starting over as farmers.

In fact, the demographic which has newly settled in the county, has contributed to boosting the area’s value.

Choe Seong-jun, 37, who came there after previously running an advertisement company in Seoul, established Soomy Village in 2010 with the area’s long-time residents to provide opportunities to urbanites to experience rural life.

Now 40 households collaborate to run and operate the village.

The county government has also supported efforts to bring in change, establishing a non-profit corporation to let ordinary citizens get a feel for what it is like to work as a farmer, providing 30 plots of land, a garden and even a house.

Bonghwa has also seen aspiring farmers as a solution to increase its population, which has continued to dwindle over the years. In 2008, the regional government passed an ordinance to support urbanites looking toward agriculture and established a new department to help them.

Now, 11.2 percent of the entire population is made up of farmers who settled there after 2000.

Korea’s central government has also outlined policies to encourage the increase in agriculture.

The Ministry of Agriculture, Food and Rural Affairs has worked to support potential farmers by providing 3 million won over three years to regional governments chosen through a bidding process.

The ministry provides 50 percent of the budget for the project to construct houses for temporary lodging for people looking to farm until they get on their feet. Seventy regional authorities nationwide are already constructing the dwellings.

But middle-aged workers are not only eyeing farming, looking to the fisheries industry as well. Alongside rural communities, fishing villages have become popular destinations for those in their 50s due to their enticing views near the coasts.

Jeon Sang-hui, 43, started working as a fisherman in 2012 after quitting his job at a construction company. He purchased a boat and advertised his hauls in Yeongdeok County, North Gyeongsang, via social media.

“I had to find something new to survive because I was an inexperienced fisherman who came from an urban area,” Jeon said.

In particular, villages near the shoreline in Youngdeok and Uljin Counties in North Gyeongsang are especially popular among aspiring fishermen, as it is possible to both farm and fish, and thereby bring in more money.

Kim Jeon-hui, a 56-year-old who sells marine goods, also runs a lodge on the second and third floors of a three-story building constructed in Yeongdeok.

“There are a lot of things to do in a fishing village other than boarding a boat to catch fish,” he said.

Kim added that he is also planning to establish a cooperative union with other aspiring fishermen.