Murdoch to pass media dynasty on to sons

Murdoch to pass media dynasty on to sons 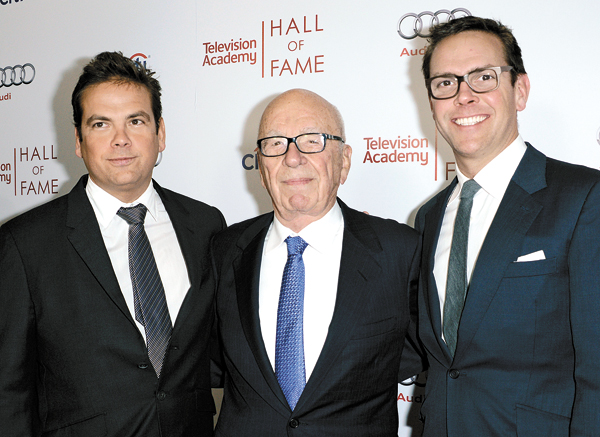 Rupert Murdoch will soon hand over the reins of the media dynasty that began with his father’s Australian newspaper nearly a century ago to his sons.

The specific timing of the handoff of 21st Century Fox is unclear. But as James Murdoch prepares to take over as CEO and Lachlan Murdoch as executive co-chairman, some on Wall Street worry about how the pair will run the conglomerate behind Fox News, the Fox broadcast network and the 20th Century Fox movie studio. The moves were expected eventually, but shares were down slightly when news of the changes came Thursday.

Michael Nathanson, an analyst at research firm MoffettNathanson, said investors will be watching closely for things like whether the company continues to be open with Wall Street, particularly with profit guidance.

“It comes down to what choices they make,’’ he said.

While the timing of the moves had not been expected so soon, they come a year after Murdoch elevated both sons into prominent roles. In March 2014, James, 42, was promoted to co-COO alongside the elder Murdoch’s popular lieutenant Chase Carey, while Lachlan, 43, was named nonexecutive co-chairman.

Murdoch told employees in an internal memo at the time: “This evolution of our leadership team underscores the considerable planning that both the company and the board have undertaken to ensure a vibrant future for 21st Century Fox and its shareholders.’’

The 84-year-old patriarch is one of the world’s most powerful media magnates and has run the company known as News Corp. since 1979, before it split into two separate entertainment and publishing companies two years ago: News Corp. and 21st Century Fox.

Murdoch, an ambitious executive with a flair for big acquisitions, has been known for upending the media establishment with bold moves, but also for over-paying for assets he sets his sights on.

In recent years, as he’s been stung by a phone-hacking scandal by his journalists in the U.K. in 2011 and the financial decline of his beloved newspapers, Murdoch’s role has lessened. Carey, who has long been seen as a shareholder advocate and the voice of reason in controlling the pace of acquisitions, promoting share buybacks and streamlining its vast tangle of minority investments, had led interaction with investors at conferences and quarterly earnings calls.

A person with direct knowledge of the transition said the elder Murdoch will remain deeply involved in the company, while his sons are to run the rest of the business as a partnership. The person was not authorized to speak publicly and spoke on condition of anonymity.

Murdoch will still retain a grip on the corporation through a family trust that owns 38 percent of the voting shares. Fox News CEO Roger Ailes will also continue to report to the elder Murdoch directly.

“I think the boys are back,’’ said David Folkenflik, an NPR reporter who wrote a book called “Murdoch’s World: The Last of the Old Media Empires.’’ They are “yoked together in a sort of competitive collaboration.’’ AP