Auction business missing out on the real estate boom

Auction business missing out on the real estate boom

Homebuyers interested in purchasing an apartment crowding a model house that displays the miniature model of the exterior and life-size interior in Boryeong, South Chungcheong, on May 31. Interest on housings have surged recently thanks to low loan interest burden and government policy support of the real estate market. Provided by Daelim Industrial

A housewife in her late 30s has recently taken a keen interest in newspapers’ real estate sections.

“I want to apply for a presales order at an apartment complex in Wirye New Town [southeastern Seoul] near our house,” said the housewife, identified only as Kim. “I’ve noticed that many of my friends either are investing in reconstruction and redevelopment apartments like the nearby Garak Siyoung Apartment in Songpa or the ones in Wirye.

“I feel an urgency to join in as it seems like this is the most opportune time with the real estate market picking up again.”

The real estate market that had been in a long slumber since the global financial crisis of late 2008 is riding high again on the back of loosened monetary policy by the Bank of Korea and policy support by the government of President Park Geun-hye, which includes eased requirements for obtaining mortgages. 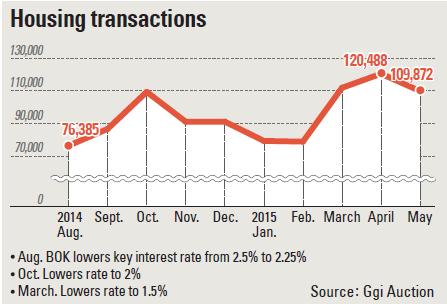 On the flip side, as the number of opportunities for buying new apartments has risen, the auction market has been on a slippery slope.

According to a recent report by the Ministry of Land, Infrastructure and Transport, 100,614 housing units were bought and sold in May.

Housing transactions have remained above 100,000 units in each of the past three months. Although compared to April’s 120,488 units sold, May’s figure is an 8.8 percent drop, it remains 40.5 percent higher than the same month last year.

Furthermore, the accumulated sales of housing units in the first five months of this year was at its highest level since 2006. The total number of housing units sold from January through May was 500,413. That’s 25.2 percent more than during the same period in 2014.

“Housing transactions have grown because there are continuing expectations that the housing market is finally recovering,” said a Land Ministry official.

In particular, sales of apartments have increased in the greater Seoul area. Housing transactions in Seoul, which have remained lukewarm since the global crisis, surged by 67.6 percent in May to 58,963, far outdistancing combined growth of 18.3 percent in other regions.

Daewoo E&C reported that there were 161 pre-order applications for each apartment available at Wirye new town. Nearly 70,000 people signed up for 430 available units.

This is the most intense competition the market has seen since 2006, when Pangyo new town in Gyeonggi was up for pre-construction sales.

“The people who have been exhausted by the jeonse crisis [steadily rising jeonse prices and a shortage of inventory] have turned around to purchase housing units using the low interest rates on loans,” said Kim Eun-seon, an analyst at Budongsan114, which specializes in real estate information. “This helped apartment transactions to really pick up.”

According to Kim, long-term rent jeonse houses in Seoul have seen prices grow 6.3 percent year-on-year so far this year, compared to the 4.4 percent average growth nationwide. This year, the cost of jeonse already has exceeded 70 percent of the value of the properties. 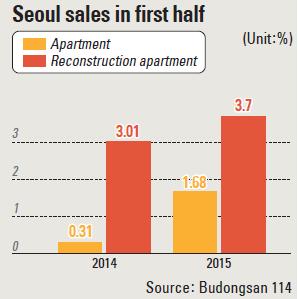 “One would have to say the recent phenomenon is not only homebuyers who are purchasing apartments to live in, but also buyers who want to profit from their investment who are driving up the market,” said Ham Young-jin of Budongsan114.

While the housing market has been on the rise, the auction block has been losing business. According to Ggi Auction, a company that specializes in real estate, the number of properties auctioned last month was the lowest ever.

Last month, 4,447 properties were auctioned. This is even lower than the previous record set in February, when 4,669 units were sold.

The ratio of successful auctions to the total number of properties put up for auction was 38.9 percent. This was half a percentage point lower than April’s 39.4 percent.

One of the reasons the auction market hasn’t been so popular is because homebuyers have a better opportunity to purchase thanks to low-interest mortgages.

In addition, the price of auctioned properties has been relatively high.

Some market experts cautioned prospective buyers who are interested in jumping into the market now.

“Apartment prices have reached their highest and will likely start to fall from the second half,” said a realtor, who asked not to be identified. “The biggest factor will be when the U.S. Federal Reserve starts raising interest rates. The Bank of Korea would be forced to follow, which would suddenly create a huge financial burden for people who buy apartments with bank loans.”

The Bank of Korea on Thursday lowered the key interest rate once again to a new record low of 1.5 percent as a preemptive step to prevent the economy from contracting due to the Middle East respiratory syndrome (MERS) outbreak.

On Friday, Bank of Korea Gov. Lee Ju-yeol reassured the market that the Korean central bank will maintain a loose monetary policy and even hinted at the possibility of another rate cut.

However, some experts are skeptical about whether the Korean central bank will have the ability to keep the low interest rate policy when the U.S. Fed starts raising its own benchmark rate.

The Korean economy was heavily affected in the mid-2000s when the U.S. Fed under then-Chairman Ben Bernanke raised the nation’s borrowing rate above 5 percent.

“Who can say they won’t do it again? And if that happens, there will be a massive exodus of foreign investments that will likely force the BOK to tighten up Korea’s own interest rate,” the realtor added.

If apartment values continue to fall while interest rate goes higher, there could be a massive panic in the market as homeowners who purchased homes with loans could once face a heavy financial burden as many did after the global crisis of late 2008. In late 2008 and early 2009, homeowners who weren’t able to pay off the interest on their debts were forced to sell their properties at a cheap price or put them up for auction.

Household debt since the second half of last year has been rising at an alarming rate. In April alone, 10 trillion won ($9 billion) worth of new loans were taken out, which is the biggest amount of loans taken out for a single month since related data has been compiled.

When adding the purchases made using credit cards, as well as loans taken out on credits, the total debt has almost certainly exceeded the 1,100 trillion won barrier.

As of end of March such debt reached an all-time record of 1,099.3 trillion won.