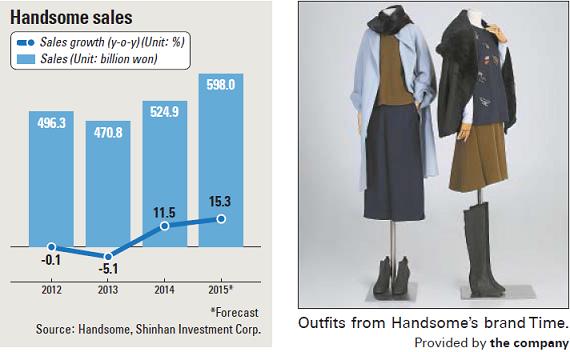 “The same principle applies to both department store and fashion businesses: If you’re faithful to the basics, they’ll turn out well,” said Chung Ji-sun, the chairman of Hyundai Department Store Group, in reference to the company’s takeover of Handsome, a design house that owns a number of leading local and foreign fashion brands.

Since being acquired by Hyundai Department Store in 2012, Handsome has seen a successful turnaround. Analysts are making rosy estimates for the company, with both its sales and operating profits expected to see two-digit growth.

This is unusual in fashion retail today, where only a handful of brands like Uniqlo and Zara - dubbed in Korea as specialty retailers of private label apparel - are making profits.

Industry insiders say Chairman Chung’s reverse concept of “growth within a slowdown” has paid off.

For instance, Hyundai did not hesitate to invest in people, hiring 100 more designers to bring its team to around 260 in the past three years.

Chung also put an emphasis on well-rounded education and training for the designers.

Handsome employees were required to take courses in humanities, psychology and leadership, and share their learning with their peers in different teams and divisions.

The company also has a female-friendly policy. Around 75 percent of Handsome employees are women. It set up a rest area for pregnant employees and reduced their hours while adopting flexible working time.

The company also has plans to open a top-notch child care facility next year for its employees.

Rather than following emerging trends, Handsome focuses on original designs. High-end handbag brand Decke and knitwear line The Cashmere are products of such an approach.

Around 70 percent of Handsome’s sales comes from it own brands, including Time, Time Homme, Mine and System. The other 30 percent comes from the domestic operation of foreign brands such as Lanvin, Chloe, Jimmy Choo and Bally.

Handsome is well received in the fashion industry, helping it clinch the exclusive local distribution deal with upscale French women’s apparel brand Each X Other.