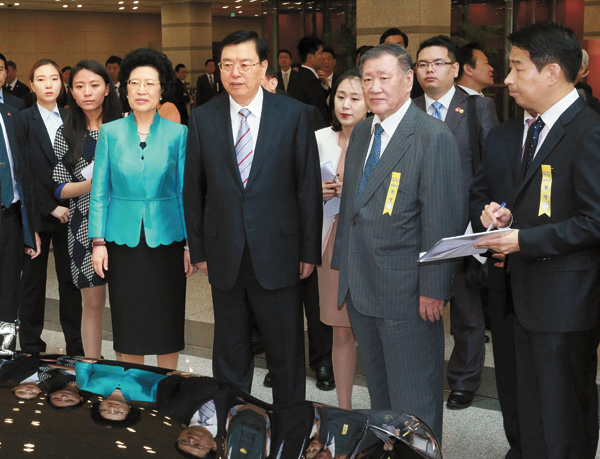 Hyundai Motor Group Chairman Chung Mong-koo, second from left, and Zhang Dejiang, chairman of the Standing Committee of the National People’s Congress, third from left, look over the company’s latest eco-friendly vehicle on Friday in the lobby of company’s headquarters in Yangjae-dong, southern Seoul. Provided by the company

Hyundai Motor Chairman Chung Mong-koo met with Zhang Deijang, chairman of the Standing Committee of the National People’s Congress of China, on Friday at company headquarters in Yangjae, southern Seoul.

Zhang is currently considered the third most powerful official in China.

The two discussed economic cooperation between the two countries as well as the automotive industry, according to the company.

Korea’s largest automaker has recently been losing ground in the global market against the backdrop of gains by Japanese rivals largely due to the weak yen.

“Hyundai Motor, as well as our parts suppliers, has grown to become the third largest automotive group in China,” said Chung. “As a company that represents the economic cooperation between Korea and China, we are contributing to the development of not only the automotive industry of both countries, but the overall economies.”

The Standing Committee chairman praised the Korean automaker’s success in China, saying a lot of the taxis in Beijing are manufactured by Beijing Hyundai Motor.

“We hope [Hyundai Motor] will continue to enhance businesses in China, including the development of new products, and contribute substantially to the economic development of both countries,” said Zhang said.

Hyundai Motor Group said Zhang was particularly interested in the development of the company’s next generation eco-friendly cars and related technologies.

Zhang also saw the new Tucson that will be introduced in China in the second half of this year as the ix35.

Zhang visited Hyundai Motor’s headquarters with an entourage of 40 Chinese politicians and government officials, including Wang Chen of the Publicity Department of the Communist Party and Qiu Guohong, Chinese ambassador to Korea.

The Korean automotive group, after a year of preparation, entered the Chinese market in 2002. It has seven automotive production plants in China, including Beijing, Yancheng and Sichuan, with a total production capacity of 1.95 million units a year.

The company hopes to increase its annual capacity to 2.7 million by 2018 with new plants in Changzhou and Chongqing. The Changzhou plant in eastern China broke ground in April and is scheduled to be finished by end of 2016 with a production capacity of 300,000 vehicles per year. The Chongqing plant in western China is scheduled to break ground in the second half of the year.

The automaker said it also has helped Korean parts suppliers enter the Chinese market, with 409 in operation there.

Meanwhile, Zhang also is getting together with other Korean business tycoons.

According to LG Electronics, Zhang has taken a keen interest in the Korea tech company.

“I think innovation is the key power source of LG Electronics’ continuous development,” said Zhang. “China is a very big market and we hope [LG] will continue to introduce new products.”

The two are expected to discuss mobile technologies and industries, as well as finance.